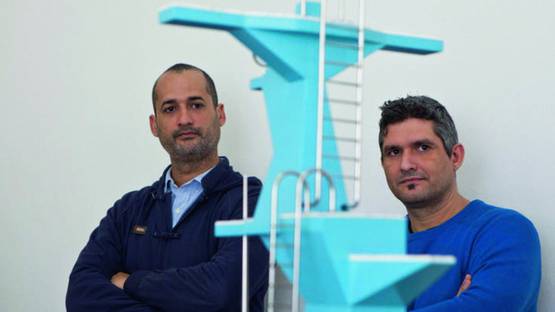 Los Carpinteros is the name taken by a group of young Cuban artists who as a collective entity specialize in the creation of humorous installations and objects. In 1991, Marco Antonio Castillo Valdes, born on September 18, 1971 in Camaguey, Dagoberto Rodriguez Sanchez, born on March 6, 1969 in Caibarié, and Alexandre Arrechea Jesus Zambrano, born on September 12, 1970 in Trinidad, formed an artistic group that what would become known as Los Carpinteros (The Carpenters). The name was chosen because of the paintings and sculptures they made using self-taught carpentry techniques. The wood came from nearby forests and abandoned houses. This was the time of the Special Period, when any materials, even those of illegal origin, were invaluable for the making of art.

All three of The Carpenters graduated from the Instituto Superior de Arte (ISA), Havana in 1994, the same year the name for their group was adopted, because they “decided to renounce the notion of individual authorship and refer back to an older guild tradition of artisans and skilled laborers.” While they were students, with absolute fluidity, they created and lived together in student residences. However, by 2003, Alexandre Arrechea decided to leave the group, leaving Marco and Dagoberto to be the duo behind the name.Their self-portrayal as “craftsmen” proved attractive to cultural institutions, and today Los Carpinteros remain important international ambassadors of Cuban art.

Their travels, exhibitions, and sojourns abroad expanded the horizons of the team and encouraged them to adopt new materials and production techniques. Watercolors replaced oil painting, and, as they put it, “We focused on making furniture. In other words, we focused on the idea of furniture, metaphors for things, objects, thoughts, everything expressed through furniture and design.” They were inveterate readers of Popular Mechanics magazine and in their sketches a topsy-turvy world was born. A logic based on incoherence and contradiction transformed buildings, tools, household objects, furniture, swimming pools, and coffeemakers. Frequently aided by engineers and architects, Los Carpinteros produce an anti-design that cloaks the Cuban flair for improvisation and humor in extreme sophistication and refinement. Considered surrealists with liberal doses of Groucho Marx, they have argued: “...we are realistic, but in a ludic way.” Their ideas are nurtured by lateral thinking and caustic metaphors. In Embajada Rusa (Russian Embassy, 2003) and Someca (2002), a peculiar architectonic critique transforms buildings into chests of drawers. Mueble Gordo (Fat Furniture) depicts a different process. This piece of furniture was conceived in similar fashion as the rest of its species, but its profile has undergone a sudden deformation. The objects and people painted by Colombian artist Fernando Botero enjoy their own obesity from a perspective, at once satirical and tender, that flirts with the viewer. In Mueble Gordo, an unusual engorgement causes the chest’s supports to buckle outwards and its very nails to tremble. It is the work of a merciless hand that wants nothing less than to challenge the grammar through which we apprehend the world.

Both Marco and Dagoberto today they live and work in Havana. They have exhibited in their native land, Europe and North America, and have received a number of prestigious awards for their work.