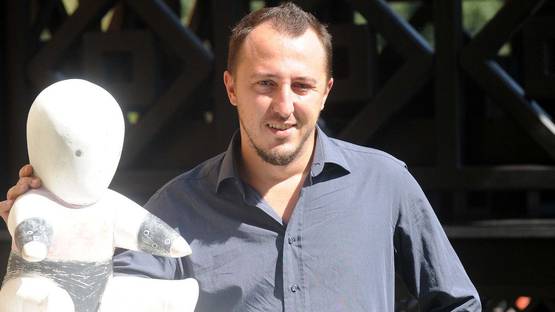 Luca Lanzi is an Italian artist whose large scale drawings and paintings are extremely imaginative, whimsical, and highly skillful.

Luca Lanzi was born in Bologna in 1977. He studied at Academies of Fine Arts in Bologna and Berlin-Weissensee. In 2005, he became a fellow of the Collegio Artistico Venturoli Foundation. He has lived one year in Germany working in the Art Academy of East Berlin.

The motif of the fetish object in the form of a doll is a persistent leitmotif in Luca Lanzi’s work as a whole. His interpretation synthesizes traditional representations of sacred idols with the products of childish fantasy. In both cases, the spell cast by these objects resides in their ability to capture aspects of invisible realms. They give some inkling of their creators’ souls and of the spirits which they warship in them.

Luca Lanzi’s work is characterized by a range of inspirations from art history and the child‘s imaginary world, by simplicity, concentration, and by the use of multilayered mixed media techniques, all of which interact to generate a poetry that is charged with magic. Lanzi’s drawings, produced originally purely as sketches for sculptural projects, have assumed an independent existence within his oeuvre, reminiscent of ancient Egyptian low relief as well as of geometric constructive drawings in the Bauhaus style.

In 2011, works by Lanzi were exhibited at the Museum of Ceramics in Faenza and were acquired for the collection of the city of Modena. His work has been featured in numerous group and solo exhibitions.
Luca Lanzi works and lives in Castel Maggiore, Bologna.