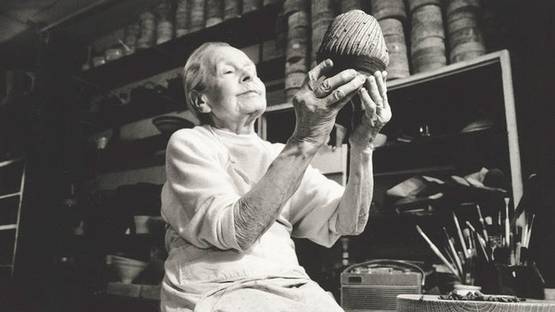 Lucie Rie is an Austrian-born studio potter, known for her distinctive 20th-century modernist style. Her perfectionism and an eye for details enabled her creativity and precision to come to the fore. She gave the new meaning and purpose to materials such as clay, stone, and minerals, by turning them into pieces of art. Unlike her contemporaries, she didn’t follow the strict lines of an aesthetic direction, but instead, she was inspired by the surrounding nature and architecture. Being forced to move to the United Kingdom, Lucie continued to do what she loves and does best, except a short trip outside of her comfort zone, when she made buttons, buckles, and jewelry during the WWII. She was one of the pioneers responsible for giving new light and identity to the world of ceramics.

Lucie Gomperz was born in Vienna in 1902, as the youngest of three children in a Jewish family. Her father, Benjamin Gomperz was a doctor, also famous for his acquaintance with Sigmund Freud. At the age of twenty, she started studying art and crafts at the Kunstgewerbeschule, where under the mentorship of Michael Powolny, she learned to throw, a technique she used throughout her career. Her curiosity immediately noted the potter’s wheel, so her journey could begin. Pots, and some bowls, that Lucie Rie made at the beginning of her career, by using a limited palette of colors like white, beige, grey, and black, had a touch of Josef Hoffmann’s influence.

Pots, and some bowls, that Lucie Rie made at the beginning of her career, had a touch of Josef Hoffmann’s influence

After graduation in 1926, she married Hans Rie, her childhood friend. During the next decade, Lucie displayed her pots, bowls, vases and vessels at International Exhibitions in cities around Europe, and got awarded Gold Medals. In 1938 a few months before the start of the Second World War, the Rie couple went to the UK, as a part of the plan to go further to the USA. However, Lucie decided to stay in London and persuaded her husband to move on without her. At the start, her pieces had a cold welcome in Britain’s art society, as a result of the Modern Movement ideas she applied to them, which differed from the common rustic look, Brits were used to.

Her pieces had a cold welcome in Britain’s art society

Lucie’s Accent on Style and Details

After the war, the artist met young Hans Coper, also an exile, who was supposed to help her with the production of buttons. Instead, his talent, support, and persuasion convinced Rie to return to the creations she originally made in Austria. New pots got sophisticated and eye-catching, leaving the impression of a delicate, yet robust pieces with fluctuations and mild inclinations in form. In her sixty years long career, Rie constantly upgraded, refined and ennobled her craft-pottery, invented new shapes and effects which became her trademark. Simplicity and vividness are the best attributes that describe the art and ceramics of this British potter. The author swapped the original earthenware pots with stone and porcelain ones while implementing proper clay bodies and glazes. She looked at her ceramic bowl not just as artwork, but as the practical object as well. Lucie glazed her dishes, craft pots, and bowls in such inimitable way, giving them rugged and rough surface. In collaboration with Coper, the artist created incredible tablewares like tea and coffee services, and cruet sets, with typical angular and thin walls, usually colored in dark brown or white. Some of them were raised to another level with sgraffito – fine, scratched, and linear detailing.

As mentioned above this potter's ceramic artworks have been exhibited in a number of places, before the war, and also been awarded several times. In 1949 Rie had her first big exhibition at the Berkeley Gallery in London. Since then, her retrospectives were mounted by the Arts Council of Great Britain in 1967, and in 1981 at the Victoria and Albert Museum. Some of these shows were the group, like the one with her partner Hans Coper, held at the Metropolitan Museum of Art in New York in 1994, others were solo. Her work was seen in the exhibition in Japan as well. In 1991 Lucie Rie became Dame of the British Empire. She died in 1995 at the age of 93.

Featured image: Lucie Rie - In her studio - Photo via pinterest.com
All other images used for illustrative purposes only