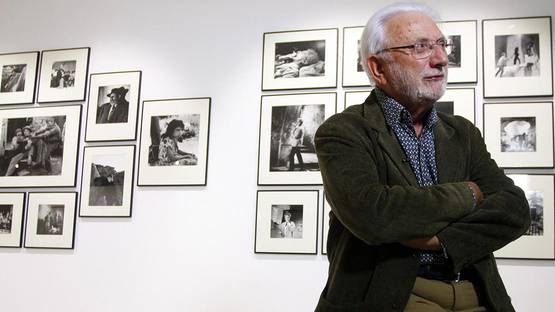 Lucien Clergue was a filmmaker, author, and photographer known for his masterful compositions and innovative use of light and shadow. His work has been associated with some of France's most significant artists, intellectuals, and musicians including Jean Cocteau, Pablo Picasso, Roland Barthes, and the Gypsy Kings.

Lucien Clergue was born on 14 August 1934 in the coastal town of Arles, Provence, and has lived there ever since. The only son of shop owners, Clergue's early life was interrupted by the experience of poverty and destruction brought on by the war years. In 1952, at the age of 18, he was faced with the untimely death of his mother. Clergue channeled his energies into shooting photographs with a box camera his mother had gifted him a few years before her passing.

Lucien Clergue first discovered the power of the camera in his difficult adolescence. He witnessed the destruction of his family's house by WWII bombsHe has spent much of his career taking photos that express loss, death and decay. He is known for his female nude torsos from the mid '50s - '70s and bullfight images from the Arles arena, where he met Pablo Picasso, a strong supporter of his early work. His later work turned to organic abstractions of sand, lace, etc. His work has been influenced by mythology, adventure and what he calls "the mentality of the Mediterranean man.

In the 1960's, he became increasingly involved in filmmaking, producing dozens of films over the course of his career, and was nominated for an Academy Award for his documentary Delta del Sel in 1967. In addition, he traveled to the United States for the first time in 1961, where he was deeply influenced by the American landscape and the photographs of artists such as Edward Weston and Ansel Adams. In addition, his time spent in the US inspired Clergue to establish the Arles Rencontres Internationales de la Photographie, a festival held in Arles incorporating theater, dance, music, and art, and which played an important role in establishing France’s prominence in the global photography market.

In 2003 he was given the famous Legion D'Honneur, and then in 2006 he was elected as a member of the Académie des Beaux-Arts de l'Institut de France, the first photographer to be given the honor. His photographs are held in museums around the world, and he has published over 75 books.