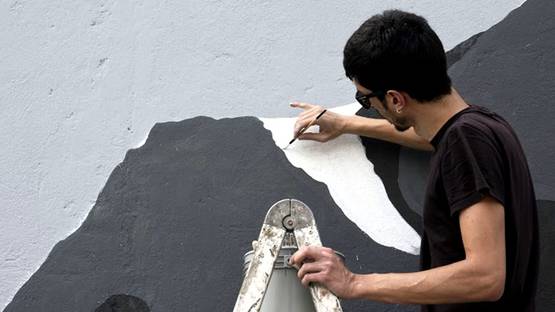 Luigi Loquarto is a street artist from Trani in Italy who loves birds, trees, stones and smell of the forest. Unlike the majority of young people nowadays, Loquarto appreciates natural treasures a lot. Nature has already created everything that we can possibly imagine, Loquarto says. In the era of the digital, Loquarto chooses to soak up the sun instead and color his paintings with fresh and intense natural shades. He's particularly interested in stones and pebbles and we can often spot them in his paintings, drawings and murals.

All of Loquarto's works exude love for nature and his artistic research is focused on the landscapes of his native Puglia, which is the most southern part of Italy, famous for its beautiful coasts and deep blue sky. Loquarto is inspired particularly by dry stone walls which are very common in the coastal regions of Italy. Another motif in his work is the pebble beach of Puglia with its pristine and delicate shoreline. Loquarto isn't simply depicting the stones themselves, but also the natural processes related to stones, such as their accumulation. Raw forces of nature like erosion or tides are transforming the stones and pebbles on the shoreline and Loquarto is documenting such transformations in his work. He doesn't stick to any particular artistic style - sometimes he prefers his paintings to be detailed and realistic, but on occasion he chooses to create something different, simplified and more abstract.

Loquarto has been an active exhibitor since 2010 when his first solo exhibition called Particelle Elementari was held in Galleria Montoro in Rome. Since then, he participated in more than 10 solo and group shows as well as art festivals. His latest exhibition from 2015 was called Accumuli and it was dedicated solely to his artistic research on stone formations. In addition to stones, another common detail in his work are small forest animals, such as squirrels and birds. He dedicated a couple of large murals in his hometown to squirrels, which is quite uncommon since the street art nowadays is rarely representing realistically drawn animals. Lastly, a couple of Loquarto's artworks are clearly abstract, such as paintings with large fields of saturated colors, but even these works have a tangible reference to nature - for example, Loquarto's large fields of blue are resembling the powerful ocean waves.

Back to the Roots

Loquarto is a young artist with a big heart who is reminding us of the forgotten beauties of nature, through his simple, warm and straightforward artworks. For many of us, weeks and even months can pass before we stop to take a rest somewhere in the park or by the river and simply ponder over the sky, trees and flowers. Loquarto is inviting us to stop no matter where we are, take a deep breath and find our peace of mind in simple things this world has to offer.