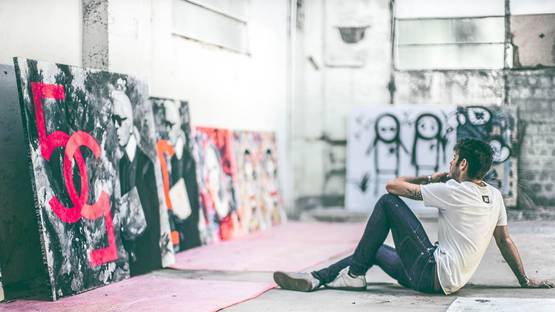 Lukas Avalon, an urban artist originally from Monaco, is turning the street art on its head by placing it onto the canvas. His artistic practices include the exciting challenge of removing street art from its natural environment, transforming it and finally bringing it into galleries and museums. He has never changed the original social themes related to the artistic form he’s influenced by – instead, he celebrates and emphasizes the talents of the greatest contemporary and street artists. Avalon is inspired by the famous pioneering creators, such as Andy Warhol, Jean-Michel Basquiat and Shepard Fairey.

Lukas Avalon’s art is a form of advocacy and social commentary. His highly detailed paintings featuring celebrities from the realms of movies and fashion transcend rather than negate the status quo and turning a blind eye, which are typical coping strategies within the contemporary society. With a constant desire to understands the hopes, needs and dreams of a contemporary man, Lukas Avalon engages the consideration and he shows empathy of the viewer. His colorful paintings pay homage to leading, legendary figures from the 20th century until today, such as Grace Kelly, Kate Moss, David Bowie and Pamela Anderson. Avalon realizes the power of fame that celebrities have and his portraits always carry kind of a subdued social commentary, which is usually hidden amongst the layers of his highly complex collages.

Avalon's colorful paintings pay homage to leading, legendary figures from the 20th century until today, which can be seen in his video channel on youtube

Lukas maintains and enhances the core elements of street art when it comes to his canvas-based works. His talent is evident in his bold and colorful pieces are incredibly eye-catching, both because of their visual attributes and the people they portray. Lukas’ portraits of legendary figures such as Grace Kelly and Kate Moss are skillfully spray painted onto canvases and cardboard-like materials. Avalon’s portrait of Princess Grace has been his greatest success so far – it was sold for 21 thousand euros on the occasion of the Fight Aids Auction, sponsored by Barclays in Monaco. Talking about the central themes of Lukas’ work, they address the omnipresent obsession with celebrities and also pay credits to artists such as Warhol and Keith Haring. I decided to paint celebrity portraits because I love the idea of what they can represent to people. I use a fast painting style to bring movement and feeling within the work, naturally marrying the rhythm of color, structure and symmetry as I go along, said Avalon about his style.

Lukas Avalon came to prominence and is widely followed by press after his debut exhibition in 2013, which was entitled Popped. Three years after his initial success, in 2016, Lukas Avalon appeared in a popular UK TV show called Made in Chelsea, where he gave an engaging artistic commentary and his personal insights when it comes to the London’s social scene. Nowadays, Avalon’s vibrant collection of artworks is available exclusively in London and he’s about to have another group show with the same gallery, on the occasion of Moniker Art Fair in October 2016.