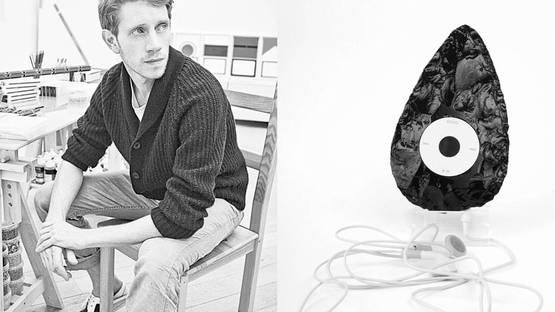 Luke Newton, the young British artist graduated from Saint Martin’s School, is sharing his views of contemporary society through his artworks inspired by the small things in daily life. Like a flash and without apparent correlation, his art works, encourage the imagination to zap fast from one image to another.

Transforming iPods into defensive weapons, hiding iconic images in QR codes and aligning symbolic red stickers on canvas, Luke Newton accumulates the most mundane things of his daily life, and interprets it subversively. His artworks are a reflection of a society in which he believes everyone tries to renew and create within the confines of routine. The interpretation of Luke Newton is harsh and always with British humor. His artworks are able to stimulate the imagination of the public bringing them into a dimension of derision and gravity.

He has cooperated with many artists and in his own right Luke Newton is a multi-form artist transposing between sculpture, painting, drawing and collage. In his artwork the traditional disciplines are questioned, and rather than tools become the subject of communication for artist.