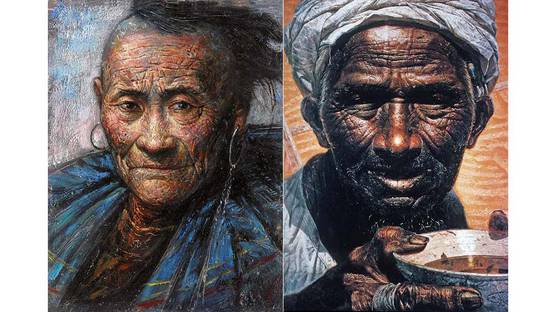 Luo Zhongli  is one of the country's leading realist painters. Along with Chen Danqing and He Duoling, Luo Zhongli has been creating masterful portraits of the people of southwestern China. His portrait, "Father," is one of the best-known works in modern Chinese contemporary art.

Luo was still a student at the Sichuan Fine Arts Institute when he created Father in 1980. The typical face of a Chinese peasant that he depicted in a photorealistic approach has deeply moved Chinese people over the years. Luo painted this “father” with relentless accuracy, showing every characteristic in sharp relief, including the chapped lips and deep wrinkles on the subject’s swarthy face.

In the 1980's, two of Luo's other paintings, Spring Silkworms and Praying, were also awarded national prizes. Like Father, the two pieces are photorealistic depictions of Chinese peasants and traditional Chinese rural social and cultural life.