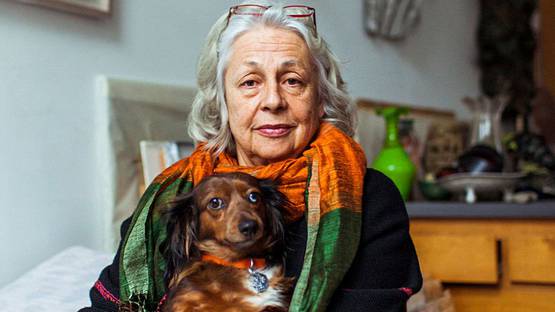 Lynda Benglis is an American sculptor and visual artist, considered as a pioneer of a form of abstraction in which each work is the result of materials in action, creating sculptures that eschew minimalist reserve in favor of bold colors, sensual lines, and lyrical references to the human body.

Lynda Benglis was born in Lake Charles, Louisiana in 1941. She earned a BFA in 1964 from Newcomb College in New Orleans, which was then the women's college of Tulane University. In 1964, Benglis moved to New York, where she studied painting at the Brooklyn Museum Art School.

Counting Andy Warhol, Sol LeWitt and Barnett Newman among her friends and peers, Benglis established her career within a male-dominated art world and became famous not only for her radical re-envisioning of sculpture and painting through her early works using wax and poured latex, but also for her works dealing with feminist politics and self-image. Like other female artists, she was attracted by the newness of a medium that was uncorrupted by male artists. The structure of the new medium itself played an important role in addressing questions about female identity in relation to art, pop culture, and dominant feminism movements at the time.

Lynda Benglis's work has always been the result of a fluid and organic working process, in which difficult-to-control materials help determine the final outcome. Her early works include wax paintings and a series of Fallen Paintings, which she created by pouring colored latex onto the floor. Benglis’s range of sculptural materials expanded to include polyurethane foam, cast aluminum, bronze, and plaster. In the 1970s, she produced a series of Torsos, cast aluminum shells that jut out from the wall, and Knots, brightly colored ribbons that resemble human figures in motion. She has also produced work in video and photography, including a controversial advertisement in the 1974 issue of Artforum, which showed the artist posing nude in a provocative manner. Benglis seeks to challenge a male-dominated discourse in art by creating work that is sensual, body-oriented, and decorative.

Known for her exploration of metaphorical and biomorphic shapes, she is deeply concerned with the physicality of form and how it affects the viewer, using a wide range of materials to render dynamic impressions of mass and surface - soft becomes hard, hard becomes soft and gestures are frozen.

Her work has been exhibited at the Whitney Museum of American Art in New York, The Walker Art Center in Minneapolis, and the Centre Pompidou in Paris, France, among many other prestigious venues. She is the recipient of a Guggenheim Fellowship and two National Endowment for the Arts grants, among other commendations.