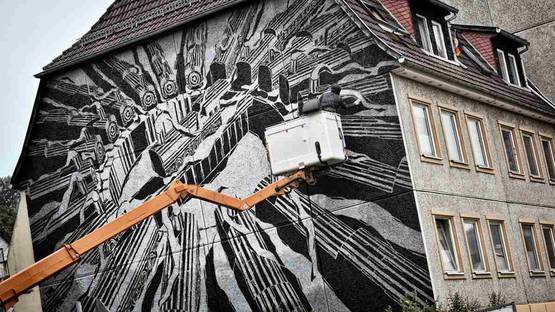 M-City is a graphic artist and outdoor painter who is an author of post-industrial murals with a geometric network of industrial elements. Also, he is the first person ever to paint a mural on the control tower of a major international airport.

M–City, or Mariusz Waras, is an artist, traveler and amateur architect which explains where his artistic precision and strength come from - his versatility and understanding of architecture. He graduated from the Department of Graphic Art at the Academy of Fine Arts in Gdansk where he is currently assistant lecturer.

Besides painting a Norwegian airport control tower, M-City created for the Nuart Street Art Festival a very ambitious art piece. It is an epic, 150 meters long supply ship he meticulously painted over using hundreds of stencils, creating a mesmerizing artwork that resembles the Norwegian fjords and the mechanical nature of the ship.

M-city’s murals are rhythmic and very precise – an effect which is achieved by the technique of hand-cut stencils. He animates urban spaces with stories in which the main subject is the metropolis and its infinite evolutions. This production is characterized by two main distinct inspirations: video games and geopolitical issues that generate a critical approach to society, making viewers understand how geographical motivations can influence political actions.

By opposing black and white images and creating such a contrast, he focuses on industrial icons like gears. In that way, the artist applies his own personal style to depict a certain sci-fi utopia.

His work can be seen, among others, in Cracow, Warsaw, Gdansk, Berlin, Paris, Jakarta, Sao Paulo, New York, Bolzano, London, Rotterdam, Gent, Budapest, Barcelona, Valencia, Florence, Belgrade, Ljubljana, Bolzano, Bucharest, Prague etc. He is a very prolific author and his work includes several hundred murals. But, he is not stopping there. Also notable is his gallery work: he had a several solo and group exhibitions in cities such as in New York, Los Angeles, Paris, and Bergamo…

M-City is based in Gdansk, but can be seen creating his striking murals all over globe.