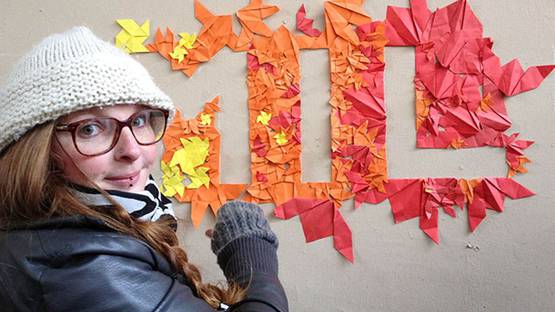 Art and its creations can mean a great many things to a great many people; some do it to make a living, others do it for the love of the craft. There is a far greater unifying reason, however, behind the works of the French artist Mademoiselle Maurice, as she places her colorful origami throughout the great cities of the world. A collective thought shared by the city’s inhabitants, the vivid forms adorning the streets truly break through the grayness, reminiscent of nature and man’s connection with it. Although young, Maurice has lived through some tough life experiences that have formed not just her character, but her artistic expression and goals.

The Way of Peace

The reason for her motivation goes back to the time she visited Japan. Spending her youth in the high mountains of Savoy, France, Mademoiselle Maurice followed the life of knowledge as she studied architecture in Lyon and advancing her skills while working in Geneva and Marseille. Deciding to spend a year in Japan would change her life, setting her upon a completely different course. Being a part of several natural disasters and tragic events while living in Tokyo in 2011, she decided to turn to artistic practice as a voice for sympathy and compassion. Influenced by the events in Japan, both present and past, she adopted the origami in her creative style, taking upon herself the way of peace symbolized by the paper cranes.

Influenced by the events in Japan, she adopted the origami in her creative style

In Tune With Nature

Ever since her one-year long experience in Japan, Maurice has been spreading her practice across many of the world’s big cities including London in the UK, Athens in Greece, Paris in France, New York in the USA, and others. Consisting of various natural materials, she often uses recycled paper, lace, embroidery, or other mixed media in order to create mural-like installations that cover various locations throughout the city. Forming all sorts of shapes, she folds many origami pieces in a plethora of colors that are put in public places, promoting the unifying message she is trying to convey. Offering a reflection not just on the relationship of humanity with the natural environment but on the sour relationships between groups of people as well, the rainbow pattern and the origami portray a signal of peace, harmony, and tolerance while splintering the grayness of urban environment.

The rainbow pattern and the origami portray a signal of peace, harmony, and tolerance

Not Everything Can Be Achieved Alone

After her return to France, Mademoiselle Maurice started gaining popularity in 2012 for her paper installations placed along the streets of Paris. Deciding to avoid the confinements of the inner space, most of her pieces can be interacted with on building walls, walkways, staircases, even the side of a prison, as these “open-air museums” give her a chance to offer her beautiful works and their symbolism to a wide audience. Furthering the sympathy and unity she is trying to portray, some of her work has been done with the help of those that enjoy seeing it. Even though each complex paper figure has been carefully constructed, some of Maurice’s installations required up to 30.000 origami pieces, which was the case at the 2013 Artaq Festival. With the assistance from the local school kids and the adults or “leisure centers'” residents, three massive installations were placed with components made months before the festival.

Influenced by the hardships and tragic events that occurred in Japan, Maurice has built her character and practice towards a brighter future rather than the wallowing of the past. Creating monumental pieces around the globe, her origami installations aren’t just easy on the eye; they can definitely brighten up the day, and the message that they carry across raises awareness and contributes to a feeling of empathy and unity. With her colorful public artwork, Mademoiselle Maurice “paints” a prettier picture of the daily life, promoting “the optimism of the action instead of the pessimism of the think,” in the words of Harald Zindler. Her works are, without a doubt, changing the reality we live in, and the fact that she has so many supporters and followers, as well as popularity in the world of art, is a testament to the success of her efforts.