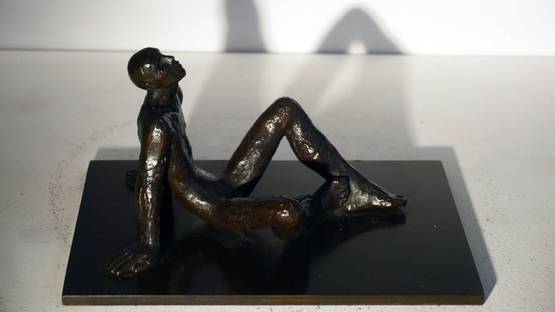 Maguy Banq was born in 1954, in Marseillan, South of France. She graduated from the School of Fine Arts of Mexico in 1992. She shares her life between France and Mexico and exhibits regularly in these two countries.

Fed to the classic techniques, Maguy Banq allies the work of the bronze to materials and forms of the minimalist art. Because the work lies itself in the association of its pure, geometrical, multiplied forms where her bronze work, as a way of cross, takes back the stages of the human condition. She is interested from the beginning of her researches in the "cycle of the absurd ", eternal resumption, symbolized in her works by the myth of Sisyphus. She experiences and expresses labour, absolute quest towards an ecstatic and calmed plenitude, which as for Albert Camus would tighten towards an "happy men".