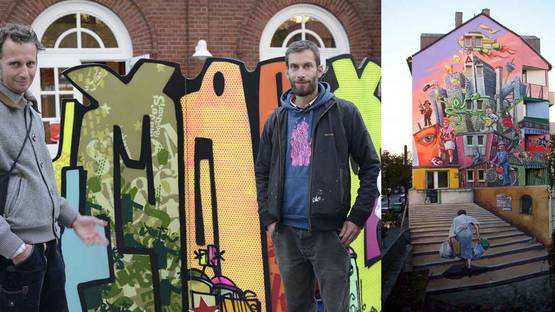 MaJo Brothers is the pseudonym for two German artists, a very active and imaginative duo, composed of Marc and Joe Hennig. Under this name the brothers have created a permanent place in the Düsseldorf art and graffiti scene in the last 20 years. Their unforgettable style is characterized by colorful and playful imagery, clear lines and expression of their urban lifestyle.

Two brothers, born in Stuttgart, became interested in art during early childhood. Their father, the famous scene photographer, Reinhard Hennig, moved with his family in the North Rhine-Westphalian capital, Düsseldorf, in early eighties, to document the development of art and music scene. He took his two sons to the various trendy bars and concert halls so they got early insight into his work. They were impressed by the close connection between artistic creation and life in the many alternative crops.

MaJo Brothers transform entire facades into blue forests and colourful puzzles or paint what they imagine to be behind house walls. In the works of this duo, yellow monkeys form a recurring motive, but also a tube of mayonnaise or french fries count among their signs of recognition. Since the 1980s they are constantly on the outlook for new chalanges such as collaborations with other artists, workshops in schools or their youth art club “Vernunt”, which was established in 2010.

In their work as MaJo Brothers, Marc Henning is responsible for the illustrations while Joe Henning takes on the graphic part working with brush and pencil. Beyond painting Marc prefers working with wood, while Joe doesn't only create works as a freelancer, but is also involved in designing of cartoons, caricatures and illustrations for some German political newspapers.

Together with Ben Mathis the brothers took part on the arranging the objects „Puzzle 17“ in the Kiefern-Street in Düsseldorf, which belonged to the project Kunstpunkte 2007. Some time later they created the largest mural, that has ever been made in Germany, in cooperation with the artist group 5x15, to which also Klaus Klinger belongs.

Apart from their mural paintings and commitment to youth work, the brothers also design logos, flyers, and posters as commissioned works.