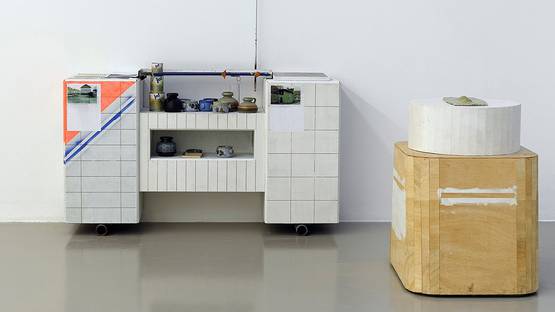 A German installation artist, Manfred Pernice uses shipping containers and packaging to create site-specific sculptures and spatial interventions. His constructions sometimes incorporate recognizable forms like a house or a bookcase.

Born in 1963 in Hildesheim, Germany, Pernice currently lives and works in Berlin. He studied at the Institut für Bildende Kunst in Braunschweig from 1984 to 1987 and at the Universität der Künste in Berlin from 1988 to 1993. He exhibited worldwide, including venues such as Musee d'art moderne de la Ville de Paris, Portikus in Frankfurt, Hamburger Bahnhof in Berlin, Sprengel Museum Hanover, Pinakothek der Moderne in Munich, The Modern Institute in Glasgow and Neues Museum in Nuremberg. He participated at the Lyon Biennale of 1997 and Berlin Biennale of 1998. He taught at Akademie Der Bildenden Künste Vienna, Vienna, Austria from 2004 and 2009, and since 2012, he has been teaching at Universität der Künste, Berlin.

While Pernice's constructions often incorporate recognizable forms, they are imbued with a sense of the absurd and the ambiguous. Each of his containers work as a metaphor, since they are not meant to be used but are rather abstractions of the "strange situation of containers", as he explains it. His work often comments on the segmentation and “canning” of space.