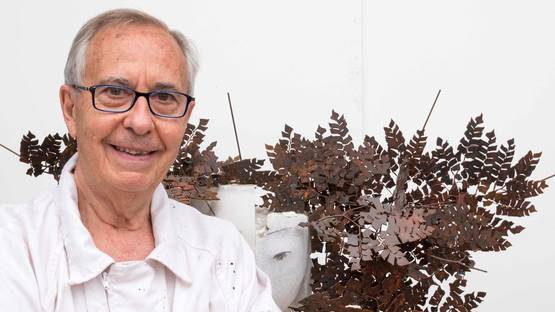 Manolo Valdés is a Spanish artist, born on March 8, 1942 in Valencia, Spain. He is a painter, sculptor and a printmaker, best known for his association with the artistic group known as Equipo Crónica.

Valdés enrolled the Escuela de Bellas Artes de San Carlos in 1957, where he studied two years, and met Rafael Solbes. In 1964, along with colleague Juan Antonia Toledo, they founded Equipo Crónica, a Spanish manifestation of the Pop Art movement of the 1960s. Through his participation in this group, which lasted until 1981, Valdés was featured in more than 60 solo exhibitions. His works from this period often expressed political commentary, and were characterized by the use of unconventional materials and crudely-applied paint. After Solbes died in 1981, Valdés continued to work in a style that became distinctly his own and independent from that of Equipo Crónica. Finding inspiration in the styles and techniques of Old Masters, such as Francisco Goya and Diego Velázquez, Valdés incorporates and appropriates traditional motifs and compositions of art history.

Valdés has received various awards, including the Lissone and Biella in Milan in 1965, the silver medal in the second International Prints Biennial in Tokyo, an award from the Bridgestone Art Museum in Lisbon, the Alfons Roig Award in Valencia, the National Award for the Fine Arts in Spain, a medal from the biennial International Festival of the Plastic Arts in Baghdad, and in 1993 the Medal of the Order of Andrés Bello in Venezuela. Along with the works he exhibited as a part of Equipo Crónicas, Valdés had over seventy exhibitions between 1965 and 1981, as many individual as collective. His work is included in public collections around the world, such as the Centre Georges Pompidou in Paris and the Musée Picasso in Antibes, France, the Museo de Arte Contemporáneo in Seville, Spain, the Kunstmuseum in Berlin, the Metropolitan Museum of Art and the Museum of Modern Art in New York, among many others.

Manolo Valdés currently lives and works in New York and in Madrid.