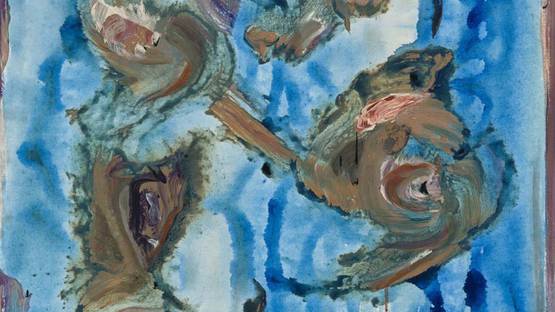 A contemporary Haitian visual artist, Manuel Mathieu is best known for his abstract works that often evoke figurative shapes in nondescript environments. His work is informed by Haitian visual cultures and Western art movements such as expressionism and existentialism.

Born in 1986 in Port-au-Prince, Haiti, Mathieu moved to Quebec at the age of 19, into his grandmother's house who had emigrated to Canada with her children. He was early influenced by his cousin and artist Mario Benjamin, who introduced him to artists that influenced his own work, trailblazers such as Mona Hatoum and Glenn Ligon. He completed a Bachelor’s in Visual Arts and Media at the University of Quebec in Montreal and acquired a Master of Fine Arts at Goldsmiths, University of London, in England. He exhibited at venues such as HDM Gallery, Beijing, China, Maruani Mercier, Brussels, Belgium, Kavi Gupta Gallery, Chicago, USA, and Tiwani Contemporary Gallery, London, UK. He currently lives and works in Montreal.

Embedding personal concerns into larger collective contexts, Mathieu explores phenomenologies of human relations as they relate to power dynamics, loyalty, love, nature, subjective experience, history writing. His paintings paintings offer a space of reflection on the history of Haïti while inviting the viewer to imagine its possible futures.