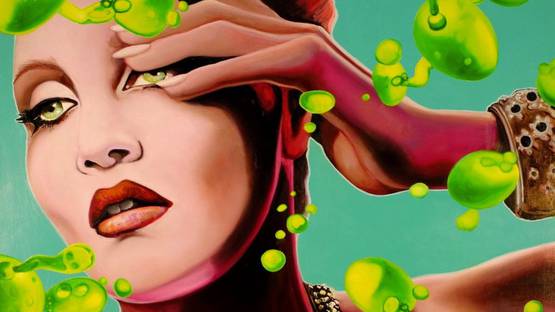 Manzur Kargar is a painter born in Afghanistan, inspired by the Internet, television, and glossy magazines. He is also a musician and composer. Having understood that the world currently presented in the media is unreal, sugarcoated, glamorous, and frightening, he uses this world as a never-ending supply of images he can use for his works. Based on these images, he makes digital collages, which serve as master illustrations for his large-scale paintings. Using familiar motifs, he pulls them out of their context, putting them into a new one, eventually creating a sensation of irritation. The end result is an attractive hyper-realistic work, painted with elaborate technique in numerous layers. Manzur Kargar has lived in Berlin since 1992, with some time spent in New York and Los Angeles. He studied painting at the University of Fine Arts (HBK) Braunschweig and at the University of Fine Arts (UDK) Berlin.