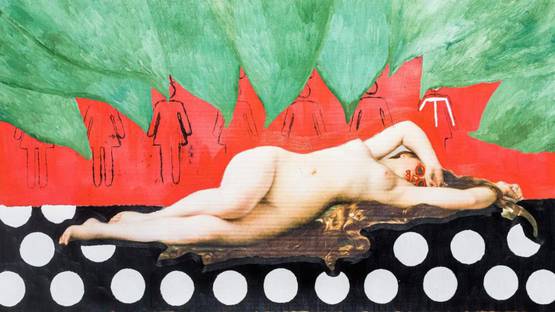 Marcarson is a pseudonym of an American contemporary visual artist Mark Carson who started his rich career back in 2008, under the influence of his admiration for fashion with his then brand Kaviar & Cigarettes. He left his conservative home in East Los Angeles, quickly finding his true calling while exploring the subcultures of Los Angeles. Marcarson’s work can be seen in both popular and unassuming locations around the world. His signature motif is “freeface” – an emblem that represents rebellion. The artist paints this logo over the faces of people appearing in his works, obscuring them and suggesting that anyone can be one of the depicted figures. In 2016, Marcarson expanded his artistic practice and opened NOT FOR THEM, an Art House that focuses on paintings, garments, objects and select collaborations. Located several blocks from MoMA PS1, the project quickly gained recognition amongst artists and collectors. He lives and works in New York City.