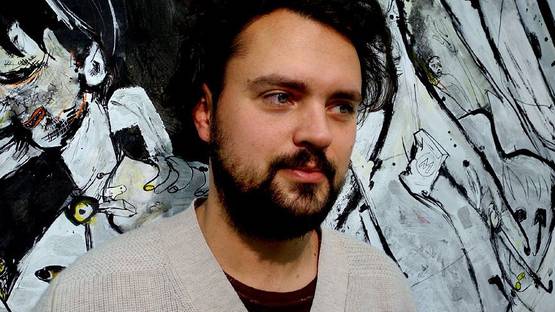 Marcel Eichner is German artist who was born in 1977, in Siegburg, Germany. From 1998 to 2004 he studied at the Kunstakademie, Dusseldorf, under Professor Jorg Immendorff, and now lives and works in Berlin. Eichner’s paintings have a powerful abstract presence, with a refined sense of color and line, creating a web of intriguing content on a mysterious stage.

There are artists who demonstrate early in life an uncanny feeling for the fluid wanderings of a drawn line which directs their imagination and intimate dreams. Eichner’s line meanders on the canvas, creating as it passes fragile personages and grotesque creatures, and when it rests there is a world filled with nightmarish scenes and mad demons. Fortunately, a glimmer of humor within these complex, imaginative compositions gives us a reprieve from the chaos and intensity within.

It does not feel like a rational, organized universe, but rather one in which everything is in freefall; perspective, scale, objects with an almost manic force running the show. However, the composition and line keep everything under control and balance within the canvases. There are echoes of Grosz, Klee, Ensor.

Evidence of psychological revelations in painting are more in keeping with a 20th century European tradition of analysis, but in this respect Eichner has a connection to Jackson Pollack’s intuitive search for form and line to express his subconscious feelings.

In Marcel Eichner’s paintings, bizarre figures move in surreal rooms. In his complex compositions, familiar settings, quotidian situations and banal storylines constantly reappear. Until now Eichner has positioned his actors predominantly in closed rooms, now he is moving his scenarios outside, in which he depicts fractions of landscapes, lakes, shores or buildings. At the same time he merges quotes of autobiographical and modern or art-historical context, which he sporadically compliments with single words or word creations.

The technical mediums which Marcel Eichner uses are just as multilayered, dynamic and rich in variety as the content of his works. With zeal he welcomes all the different options that painting has to offer. Eichner combines ink with acrylic and gouache, he juxtaposes iridescent primary colors and elsewhere he uses mixed colors which then again melt into each other. White and back accentuate the linear outline of his figures and at the same time are also used dominantly to cover large areas of the paintings in a pictorial way.