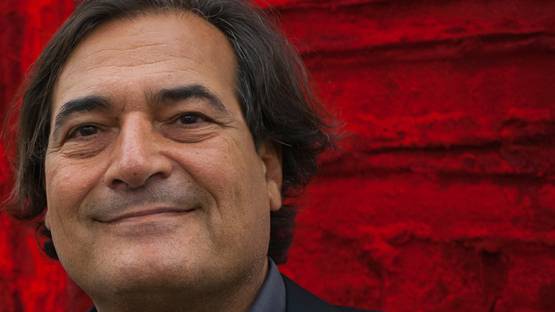 Marcello Lo Giudice is known for his unique approach in creating art. Through his career he developed his own style of conduct. He is known to be involved primarily in painting, but public often refers to him as a colorist, ceramist and installation artist. As he is a former student of geology, this sphere of knowledge gave him a unique angle in his artistic process. After a brief experience in the Conceptual Art in 1970's, during which uses traces of wax, strawberries, smoke and burns on paper , he began a careful search that led him to develop a painting in which the energy of light and metamorphism of matter combine to create remote geological landscapes.

Born in Taormina in Italy in 1955, he obtained a degree in Geology from the University of Bologna and attended the Academy of Fine Arts in Venice, where he studied under two famous Italian artists, Emilio Vedova, Giuseppe Santomaso and Virgilio Guidi.

In 2003 he begins sculpting, as a part of a trip which led him to Muscat in Oman Sultanate. This idea was conceived back in 1989 when he started to explore different kinds of mediums and materials such as ceramics. Resulting quest ended in him creating a series of Totem pieces: mattresses burned, slashed, emptied, and then painted with several colorful pigment and enamel layers which symbolize atrocities of war. These include a retrospective to a television image about the first Gulf War, where a civil house has been hit by a rocket by error: rubbles, racked bodies and various common, destroyed object like, indeed, mattresses. After performing this demolition, he applies layers of bright color using pigments and enamels. These totems have become internationally popular and widely collected.

When examining his painting style, one of the critic’s Olivier Messen gave a memorable remark: [Lo Giudice's] 'sedimentary' painting is structured by several interventions on the canvas in which colors, oils and pigments are spread with thick coatings, laid one upon the other, buried and then reemerging on the surface in various phases (with spatula scratchings, abrasions, removals, leveling). Matter gives shape to heavy and matte bodies that are going to enliven the iridescent pigments. The lines upon the surface develop interlaced designs, crossroads, interferences, bridges, pathways, canals, blind alleys, mirages."
Marcello Lo Giudice currently lives and works between Milan, Paris and Noto.