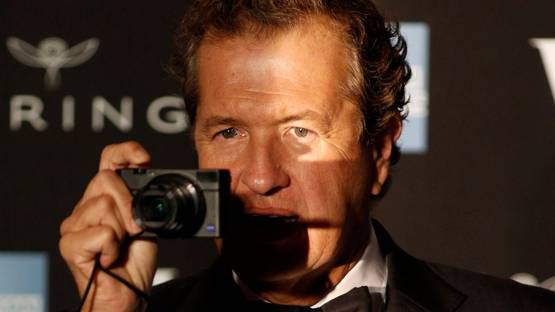 A man described as the world's most prolific magazine and fashion trade photographer by the Observer's Aaron Hicklin, Mario Testino is a Peruvian photographer who finds himself at a point of his career where he is able to define fashion as much as he documents it. With an enthusiastic style which is often referred to as luxury realism, Testino’s technique is intended to capture his subjects in moments of engagement or expression - a fact that differs him from most, if not all, contemporary colleagues. Distinguished by an informal engagement with his models, Mario's images seize both the luxury and decadence, two sides of the same contemporary fashion industry coin.

Growing up in Lima and London

Mario Testino was born and grew up in Lima, the capital city of Peru located on the country's arid Pacific coast. He was a member of a rather common and traditional middle-class Catholic family and was the oldest one of six children. Mario attended the Catholic school Santa Maria Marianistas in his youth, which can be easily attributed to his boyish dream of one day becoming a priest. After he grew up a bit, Testino first studied Economics at Universidad del Pacífico before he began attending classes at the Pontificia Universidad Catolica del Peru and the University of San Diego. However, after he abandoned the economics field completely in the year of 1976, Mario went to London to study photography. It was here in the capital of England that he was introduced to the tricks of the trade and had his first opportunity to make fine photography. London was simply a city that allowed him to flourish expressively without the restrictions he felt were imposed on him in Peru[1]. During this early stage of his career, Testino's images were very strongly influenced by the works of John Vickers and Paul Nugent. In order to get himself somehow noticed as a photographer, Mario actually dyed his hair pink and as a result got his first appearance in Vogue in 1983. And after that, as they say, the rest is history. He soon hit it big and got an opportunity to work at developing his dream of becoming a world-class photographer.

Mario Testino and His Images

Since his arrival to London, Mario has been slowly but surely establishing himself as the world’s most well-known and celebrated fashion photographer. Throughout his career, he has been tasked with documenting subjects from A-list stars, musicians, supermodels and artists[2]. Some of Testino's most recognizable images actually derive from his portraits of royals - the most famous being his well-known series with Diana, Princess of Wales, made in 1997. This was actually the last year of her life, making Mario's project that more impressive and crucial. Additionally, Mario was also the official photographer for portraits of the Duke and Duchess of Cambridge during their engagement in December 2010. He has, of course, ventured far from the royal topics as well. Widely credited to have led to the revival of Gucci as a major fashion house, Testino collaborated with Tom Ford and fashion stylist Carine Roitfeld on provocative images intended for the advertising campaigns in the mid-1990s. His versatile art which was underlined by personal characteristics led to many looking at Mario as the greatest fashion photographer of all time, with Terence Pepper even naming Testino as John Singer Sargent of our times. Mario's images have been noticed by his original country and it's neighbors as well - he has been awarded The Grand Cross rank of the Order of Merit for Distinguished Service in Peru during the year of 2010.

Filtered From All the Unnecessary Perfection

Testino once stated the following: I photograph what I see — and what I want to see. Despite the apparent simplicity, these are perhaps the most in-depth words that describe Mario's art. Furthermore, the photographer also stated that: Some people strive for perfection, but I often find perfection boring. This personal and unique approach is what got Mario on all the covers of magazines such as Vogue, Vanity Fair, and GQ, as well as make him the head of advertising campaigns created for Gucci, Versace and Chanel. Before we end, there is something else that should really be stated - alongside his practice as a photographer which is definitely his highlight, Mario has also worked as a creative director, museum founder, art collector/collaborator and entrepreneur[3]. This kind of versatility is only an additional testament to the greatness that is Mario Testino and his art. And it is due to that utility and uncompromising talent that we believe his art will be the pivotal aspect of the fashion industry for decades to come.