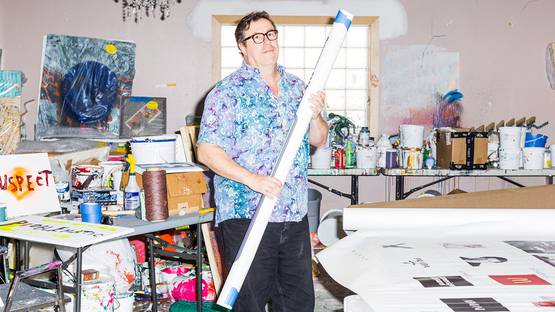 Mark Flood is American artist born in Houston, Texas, in 1957. He studied at Rice University, Houston, and graduated at in 1981. Since the early 1980s, Mark Flood has been making and exhibiting paintings, collages, sculptures, videos, and music.

For the first 20 years of his career he barely showed outside Texas, working in studios in relative obscurity in his native Houston. Flood’s paintings and collages of the 1980s and 1990s transform pervasive corporate, pornographic and celebrity imagery into provocative and knowing grotesques of the colliding worlds of art and consumer culture using adulterated found materials: signs, advertisements, flea-market paintings, and magazines. The character of Flood’s work is not the critique of a detached and ironic appropriationist, but rather more a tirade of extreme opinion in a heated argument about culture.

Over recent years, Mark Flood’s influence has increasingly been felt in the work of younger generations of American artists. His current practice’s most recognisable work is that of ongoing series’ of paintings. Since 2000 he has produced a body of “lace paintings” – wilfully beautiful canvases luridly coloured and richly patterned with impressions of decorative lace. His text paintings on monochrome canvases or found panels overspray lettering in missives urging the exploration of sexuality, the committing of suicide, or deadpan self-description. Most recently, a new series of paintings lift corporate logos from websites in low resolution and blow them up on canvas into a degraded image of massive pixels.

His work has been featured in numerous national and international exhibitions, including shows at Galerie Perrotin, Paris; Utah Museum of Contemporary Art; and Marlborough Gallery, New York. In 2009 Flood’s work was featured at REMAP2, Athens, Greece, during the Athens Biennale. Flood received the Engelhard Award in 1991 and is represented in the permanent collections of the Dallas Museum of Art; the Menil Collection, Houston; the Modern Art Museum of Fort Worth; and the Museum of Fine Arts, Houston.

His work is widely exhibited throughout the United States and abroad.