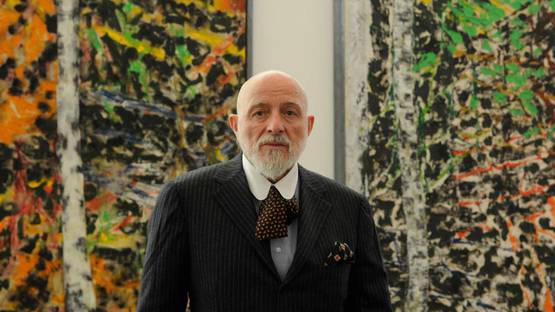 Markus Lüpertz is a German artist, born in 1941 in Liberec, Bohemia (now the Czech Republic). He is a painter, sculptor, and writer known just as much for his sense of humor as for his art work. His work is an eclectic mix of abstraction, and his sculptures are primarily heads and faces with a few full body miniatures.

Markus migrated to Rheydt, Germany, with his family in 1948, when he was seven years old. From 1956 to 1963 he studied in the class of Laurens Goosens at the Werkkunstschule Krefeld, and worked as a coal miner for a year before enrolling the Academy of Arts in Düsseldorf. He then spent a year working in road construction before traveling to Paris. Lüpertz moved back to Berlin in 1962 and created his Dithyrambic series of paintings. He opened the Galerie Grossgörschen 35 with Bernd Koberling and Karl Horst Hödicke in Berlin in 1964 with his exhibition Dithyrambic Malerei. Two years later, he published Art That Gets in the Way, Dithyrambic Manifesto. In the years between 1969 and 1977 he created the German motives. Picture compositions in the form of still lives that present symbolic objects of the past such as steel helmets, shovels or flags in monstrous dimensions. In 1970 Lüpertz received the prize of the Villa Romana and spent a year in Florence. In 1976 he accepted a chair at the academy in Karlsruhe. In the same year the Kunsthalle in Hamburg presented a first survey of his oeuvre, followed by the Kunsthalle in Bern and the Stedelijk Van Abbe museum in Eindhoven. At that time Lüpertz gave up the increasing abstraction in his pictures in favor of a new representational and three-dimensional style, in which he applied art-historical quotations and style elements. Lüpertz uses all printing techniques, works as a poet and, since 1980, as a sculptor and stage designer. In 1982 he took part at the Documenta VII in Kassel. In 1986 he was offered a chair at the Academy of Arts in Düsseldorf, which he heads as principal since 1988. Lüpertz received the Lovis-Corinth prize of the artist guild Esslingen in 1990.

Important individual exhibitions were dedicated to his oeuvre. A work show arranged according to subject was organized at the Art Collection North-Rhine-Westphalia in Düsseldorf in 1996 and a retrospective exhibition at the Kunsthalle of the Hypo-Culture Foundation in Munich in 1997, which was later presented in Wuppertal and Barmen. In 1997 and 1998 his works were represented at the exhibition Deutschlandbilder: Kunst aus einem geteilten Land in the Martin-Gropius building in Berlin.

While known primarily for his visual art, Lupertz also published a collection of poems in 1981, and has edited a journal since 2003. He has dabbled in theater productions as well. He did the stage design for the operas Vincent in 1982, Werther in 1983, and The Storm in 1991. If his work in literature wasn't enough, he also created one of 12 cathedral windows for Machabaerchir in St. Andreas Cathedral in Cologne. He has won many awards and accolades including the Lovis Corinth Prize of the Artists Guild.

Lüpertz currently lives and works in Düsseldorf and Karlsruhe, Germany.