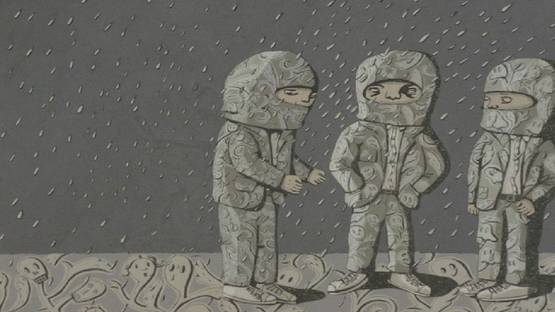 Visual art was always the most useful medium when trying to represent dreams. Nevertheless, it depends on the artist in what way will the dreams as a product of someone’s mind be presented. Marna Hattingh started as a children’s book illustrator, creating paintings for group exhibitions along the way. Keeping her focus on both forms, in the end produced a compelling artwork. A unique combination of illustrative experience and social observance managed to create paintings which have a potential to intrigue both sides of the viewer’s mind - viewer as a child and viewer as a grown and mindful being. It’s a complex combination of two polarities - possible only in dreams.

South Africa as a Starting Point

Marna Hattingh graduated at the University of Stellenbosch in 2000 with a BA Fine Arts degree and a post-graduate honours degree in Illustration. It could be said her art is influenced by her native culture. African influence can be seen in the chosen colors and various details that are found in the artwork, but it goes beyond that. It incorporates global ideas and observations and South Africa is just the starting point - Marna observes the world through her own eyes. The idea of who she is prevails and she doesn’t let the outside influence to become the inner one. What it means is, even though the spur can come from the outer world (media), it is shaped in the subjective way Marna acknowledges it.

Her characters are rarely static, even when they are simply standing. Through the simple motion of walking or dancing, these anonymous characters tell a story, or better yet, they tell a part of a much bigger story. Also, they are almost absorbed in the background colors, giving the pictures a heavy detail feeling. One where the danger of being overwhelmed for the viewer exists, but is never realized.

Finding Her Ideas in Media, Fashion and Fiction

Current and traditional do not always have to be on the opposite sides. Same goes for fashion, especially when it’s presented from an artistic point of view. Through combining traditional Asian fashion with the modern western fashion, Marna’s art gives a unique look to her characters. In that way, they manage to show the coexistence of those two worlds. Because of that and the art style, her art often stands out in exhibitions where more artists are presented. A good example is the exhibit from 2015, Memories in Motion. Thanks to the variety of colors and details, her art doesn’t have the realistic view on the given topic, but the fictional one. A view a child can enjoy and a grown up person can admire.

Hattingh combines traditional and modern fashion in her artworks

The core of Marna’s art is finding the point where two opposite sides collide and find unity. Be it in fashion, personalities or culture. She creates art that has a lot to say, but at the same time, it leaves space for the viewers to contemplate on their own version of the story. Sometimes, this kind of approach can be misguiding and it can miss the point, but with Marna, that's not the case. Her work balances on the quality line between either being too complex or being too simple. She manages that with the rich colors, occasional usage of shadows and her characteristic style. The occasional shadow is specially interesting because by not inserting shadows in every artwork she preserves the freshness and randomness of her art. Artworks with a shadow leave a deeper impression, while those that lack shadows, logically also lack the depth. If all of the artworks followed the same procedure,no matter if the first or the later one, the overall result would not be as interesting. This way, it shows how the small details can sometimes play a big role, especially in art.