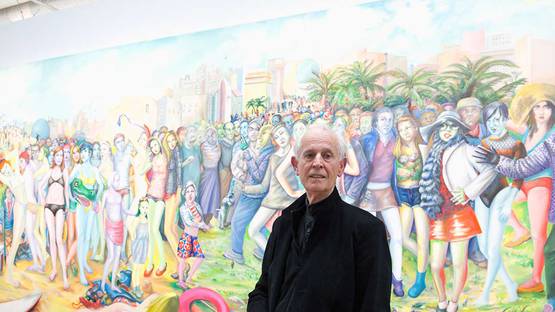 Martial Raysse is well known French artist, famous for his distinctive approach in painting and his recognizable imagery.His early works were assemblages which included plastic objects. This appropriation of prefabricated materials led to his association with Nouveau réalisme.

He was born at the end of the 1930's and was still very young at the beginning of the New Realism movement in 1960. After a brief formative stint focused on painting, he joined up with the group of Nouveaux Réalistes comprised of Y. Klein, César, Armand e Jean Tinguely despite his early captivation with pop art.

He was drawn to the industrial aesthetic and “the marvelous aspect of commonplace items, including the most unimaginative ones; he created Hygiène de la vision (1961-69), a series of works that substantiates the concepts of consumer culture through his assembly of objects made of plexiglas, mirrors, bathroom accessories, neon signs, and advertisements.” Nonetheless, Raysse’s participation in the Nouveau Realisme movement was relatively short-lived. In fact, he quickly decided to concentrate on developing a personal style and philosophy in order to give shape to an artistic vision that he could call his own. Looking to push the limits of social norms, Raysse ironically reinterpreted renowned nude paintings of the past (La France Verte, 1963; Made in Japan, 1964).

The turning point of Raysse’s career came between 1970 and 1976 when a transformation and evolution of his work came about as a result of internal turmoil, the struggle to reconcile different cultures and accept radical ideological changed, and a desire to escape the constraints of a so-called “traditional” career. This artistic revamping is seen as the cause of the artist’s existential declaration, “A painting is the teaching of freedom. It’s the only vindication of the artist. But what is important today is to change what surrounds us appealing to the need for human coexistence. Some believe that life is to be replicated. Others know that life can be innovative. We shouldn’t quote Rimbaud, but instead live him.” Internationally distinguished from 1962 with the exhibition of Raysse Beach in Amsterdam at the Stedelijk Museum, he represented France at the Venice Biennale in 1966 and 1982. After a period of tireless research of cinematographic techniques, from the 1970s on he dedicated himself again to the figurative applications of painting. He hosted private shows both in Europe and the United States. Between 1992 and 1993 the Parisian Jeu de Paume dedicated a considerable anthological exposition to him.