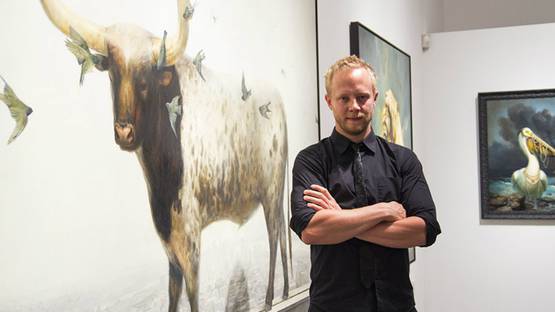 Suggesting the future of the human existence without showing a single person, Martin Wittfooth creates allegorical oil paintings of majestic animals. Excepting traditional techniques of the old Masters in combination with new approaches, his visual language reveals exceptional depth in both medium and content. Indicating the issue of climate changes, his mysterious and beautiful images convey the impression that something in this world is wrong. Although absent, human subsistence is depicted with their rubbish remains, as junked car or demolished buildings, in the world given over to animals that encourage us to think about our place in it.

The Future is in Human’s Hands

Born in Toronto, Wittfooth spent his childhood in Finland. He moved to his hometown to study where he earned his BAA in illustration from Sheridan College and then MFA at the School of Visual Arts in New York. His work has been shown nationally and internationally and has been published in numerous relevant magazines, as Hi Fructose or New American Paintings. Surpassing the illustrative genre, he entered the realm of modern masterworks, finding his inspiration in the 19th-century painters. Creating the familiar contents, he incorporates a feeling of dystopia and dilapidation in his post-apocalyptic vision and symbolism of using animals instead of humans as subjects. Wittfooth underlines the possibilities of what could happen if people do not adopt some changes.

Wittfooth explores the theme of shamanism

His series of oil paintings named The Offering explore the theme of shamanism and its revitalization worldwide. In accordance with its practice of researching altered states of consciousness in order to interact with the world spirit, Wittfooth asserts that those beliefs have an influence on people’s egos and materialistic obsessions, helping the connection with nature and other humans. There are the traces of destruction in his paintings, as fires rage and oceans surge, but the creatures carry the surreal peacefulness, celebrating the existence, they represent the life-givers.

Always been drawn to visual art, Wittfooth’s interests and tastes had passed through a lot of changes. During the studies in New York, he had a chance to experiment with oils as medium and to reassess his personal ideas. Exploring his own paintings in series, he is trying to have a wider theme over the whole body of work. Every painting is a piece of a puzzle, but all of them can speak individually, representing their own solo show. In series The Passions, Wittfooth borrowed tittles and composition from classical paintings and sculptures, processing the theme of blind faith and human martyrdom. One of his favorite motifs, the fire, instead the symbol of destruction, here represents the substitution for halo.

The animals are symbolic substitution for humans

Featuring creatures in unexpected environment, that deviate from the natural surrounding we used to, in Wittfoot’s paintings smog fills the sky and garbage and decay lay on the ground. Small animals get the heroic role, while large ones represent the calmness and peacefulness. Aiming to induce the viewer to question and challenge which is taken for granted, he’s work investigate themes of industry and nature, human influence on environment, the collision of obsolete ideologies with modern fears. His creative language uses the combination of symbolism, the juxtaposition of visual narratives and the displacement of expected realities.