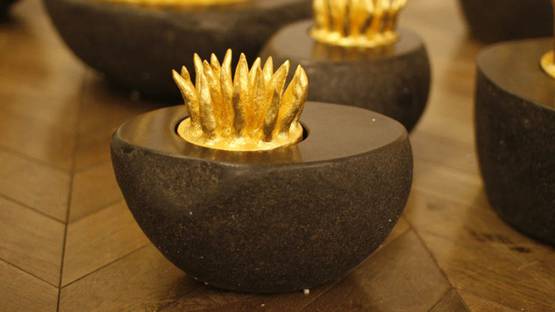 Marvin Minto Fang, born in 1955 in Taiwan, is a sculptor whose work is largely inspired by aspects of nature. He attended the Woodbury University and received a Bachelor of Arts in Interior Design in 1982. In 1983, he received his Masters in Arts in Environmental Design from the California State University. In 1987, he received a Masters in Fine Arts from the Otis Parson School of Art.

Fang uses plywood to recreate aspects of nature such as branches, plants, and trees. He says that “although the piece has a natural facade, it is based on a non-natural construct” and uses this idea in his art to challenge the inherent way people think about aspects of life and nature.

Fang began exhibiting in 1984. He has since held solo exhibitions at the Pekin Fine Arts in Beijing and has work included in a number of important public collections such as UBS Bank Art Collection, Los Angeles Country Museum, Taipei Fine Arts Museum, and the Cincinnati Art Museum.