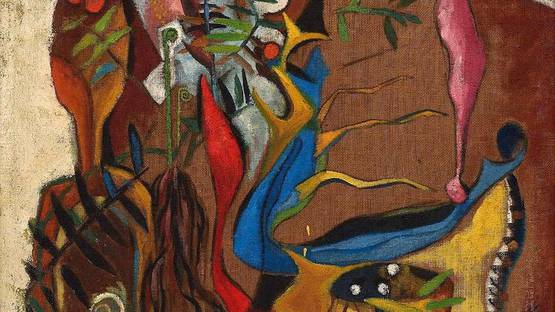 A painter who was at the heart of the Abstract Expressionist movement in New York in the 1940s and ’50s, Mary Abbott is known for bold, colorful works, often inspired by nature or music. Despite being one of the greatest Abstract Expressionist painters of her generation, she received far less recognition than her male counterparts.

Born in New York City, Abbott was a student of artist George Grosz while attending the Art Students League of New York. At the experimental school, Subjects of the Artist, she worked with Barnett Newman, Mark Rothko and David Hare. She also studied at the Corcoran Museum School in Washington DC. After the World War II, she joined the "Downtown Group" and set up an art studio on Tenth Street in Manhattan. Soon, she became one of the only three women included in "The Artist's Club", alongside Elaine de Kooning and Perle Fine.

An early participant in the development of Abstract Expressionism, Abbott created works characterized by sweeping and energetic brushwork, as well as the use of vibrant color derived from her mood or her surroundings. Her work had languished without much art-historical recognition until recently, when she was one of a dozen painters included in the exhibition Women of Abstract Expressionism at the Denver Art Museum.