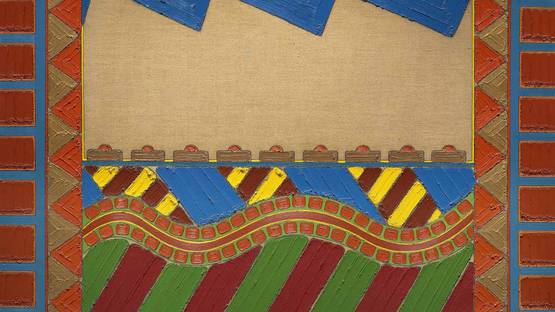 An American contemporary artist, Mary Grigoriadis is best known for paintings and drawings that depict rigid fantastic structures, densely packed with pattern and color. She embraced the Pattern and Decoration movement, one which used the often dismissed art of women’s handiwork, to introduce new approaches to composition, space, and design.

Born in 1942 in New Jersey, United States, Gigoriadis earned a bachelor's degree from Barnard College in 1963. In 1965 she received a Master of Fine Art degree from Columbia College, New York. She was a member of the Pattern and Decoration art movement and one of the four original founders of the first women's cooperative gallery in America, A.I.R (Artists In Residence) in 1972. Her work is included in the collections of the Whitney Museum of American Art, the Smithsonian American Art Museum, and the National Museum of Women in the Arts.

The artist's works explore the interaction of patterns using a bilaterally symmetrical format of frames within frames. Executed in rich hues, her works integrate poly-ethnic patterned borders using sources as diverse as Byzantine and American Indian art. She refers to her works as "secular icons" and describes them as as "a paean to beauty, opulence and order."