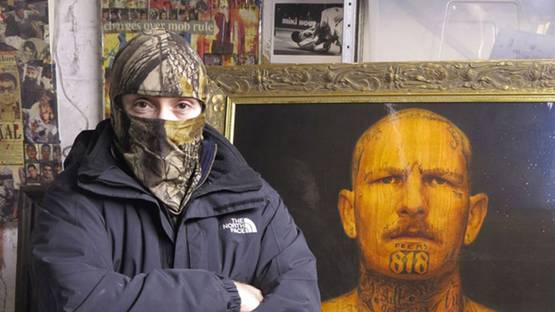 Politically Charged Topics in the Work of Mason Storm

Mason Storm was born in London in 1974. Before he begun to pursue his artistic career he spent some time in working in the variety of industries and worked as Judo and self-defense instructor, freelance security contractor and consultant, journalist specializing in intelligence, espionage, and terrorism. The artist graduated law and also spend some time working as a barrister. Mason Storm wondered in the world of art by chance. One day his Judo class was canceled so the artist entered an art class held in the same youth center. He continued to come over for 15 years and to work hand in hand with people who went on to become Royal Academy, The Royal College, and Saint Martins college art graduates.

Apart from his art, Mason Storm is known for his interesting masks which he uses to hide his identity and create the mystic surrounding his personality

The Banksy Controversy and Banksy-inspired Artwork

The artist came to prominence in 2010 when he claimed that he will reveal the identity of the world's most famous street artist Banksy. This public stunt that was meant to promote a group show Mason Storm participated in, changed the life of the artist and resulted in mixed reactions from people. On one side it had gotten the artist some much-desired publicity, on the other, he and his fellow artist have received a lot of death threats. Later on, the artist responded to the controversy by painting an art piece inspired by Banksy in which he was portrayed as a monkey to reflect on his Laugh Now Monkey stencils series. Mason Storm is one of the artists known for using their works to comment on the political issues such as terrorism and racism. The artist creates an array of portraits of famous figures like David Bowie, Steeve McQueen, and Kat von D. These famous figures are usually portrayed in unusual settings with unusual props to convey a variety of messages.

From Baroque to Urban Art

Apart from the celebrities, the artist is also inspired by famous paintings dating from Caravaggio and baroque to Damien Hirst. Mason Storm makes thought-provoking interpretations of famous art pieces adding elements typical of today like McDonald's food and mobile phones to create clever and at times, humorous juxtapositions. His works portray the images of children gambling, soldiers throwing pies and tough guys holding bunnies. A majority of Mason Storm's paintings are also available as prints. Apart from his thought-provoking paintings and prints the artist also makes a variety of sculptures dealing with equally provocative topics. From American soldiers to crack babies the artist continues to shock and raise awareness of religious and political hypocrisy around the world.