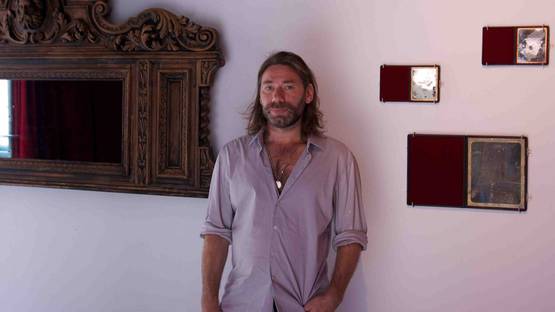 Mat Collishaw, born in 1966, received his BFA from Goldsmith College, London, in 1989 and began his career exhibiting the acclaimed work Bullet Hole alongside his Goldsmiths contemporaries at the legendary show Freeze in 1988, and at Modern Medicine in 1990. Both shows were curated by Collishaw’s long-term friend Damien Hirst and are renowned for the rise to prominence of the YBAs (Young British Artists).

Collishaw’s work envelops us in a twilight world poised between the alluring and the revolting, the familiar and the shocking, the poetic and the morbid. With a visual language embracing diverse media, the beauty of Collishaw’s work is compelling – seductive, captivating, hypnotic – yet repelling as we perceive the darker fantasies within. A repulsion triggered not by what we see, but by our innate response to it. Something between beautiful and abject.

Pornography, the crucifixion, gleaming fairies, syphilitic child prostitutes, bestiality, bondage, addiction, religion, exaltation and despair, even the final hours of a death-row inmate. There is seemingly no taboo left unbroken, no dark corner Collishaw is unwilling to explore – and yet, the work is utterly romantic, exquisitely beautiful, an expression of Collishaw’s wish to “create images that are awe-inspiring”. The forbidden has always fascinated Collishaw: “I am fuelled by things in my past which were suppressed or held at a distance, which have generated some form of hunger to make my work.” Hardly surprising then, that themes such as stifled sexual desire, brutal and perverse lust, the power of media imagery and the concept of divinity recur throughout his oeuvre.

What is surprising, startling even, is the tenderness and ecstasy – the almost sublime – embodied within the work. “There are mechanisms within us that are primed to respond to all kinds of visual material, leaving us with no real say over what we happen to find stimulating.” Collishaw is interested in imagery’s effect on the subliminal, and explores this by making the vile desirable, the repulsive inviting, whilst discretely positioning himself within art-history through his reference to old masters and contemporary dialogues, as in his work The End of Innocence (a digital recreation of Francis Bacon’s painting of Velasquez’s Pope Innocent X) or his questioning of Victorian mores and ideals, executed with 21st century technology.

Collishaw’s interest in the Victorians is no coincidence: 19th century Britain viewed itself in the light of scientific progress and empirical soberness. An age inhabited by educated and prosaic people. In retrospect however, child prostitution, poverty, perversion and a collective blood-lust ran parallel to what was deemed an enlightened age. Collishaw references the Victorian period by simulating its elaborately decorative, romantic style, but he indirectly conjures up that society’s dark side, the corrupt underbelly so pertinent to the present day. He drags our darkest urges into the light – illustrating that humans will never overcome their baser instincts, regardless of aesthetic or scientific advancement. The fact that Collishaw does not take the moral high ground makes his work all the more compelling: he simply shows us the beautiful – even if it is a beauty that sometimes turns out to be highly suspect.
The Victoria & Albert Museum commissioned Collishaw with a monumental onsite project, Magic Lantern, which – installed in the cupola above the entrance – appropriated the very architecture of the V&A creating a beacon of light, complete with an attendant swarm of moths, and was visible across London during the winter months of 2010 - 2011.

Images courtesy of the artist and Blain|Southern.