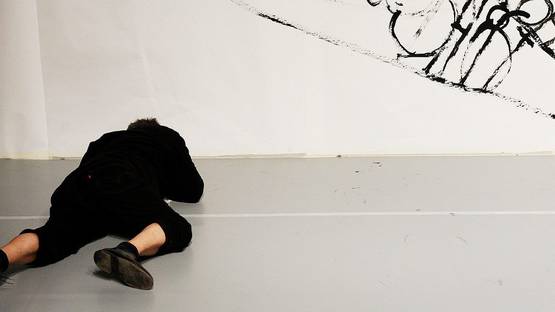 Matt Mullican is an American visual artist, who has over the years created a complex body of work that deals with systems of knowledge, meaning, and language through drawing, collage, video, sculpture, performance, and installation.

Born in 1951 in Santa Monica, California, Mullican received his BFA from CalArts in 1974, and rose to prominence as a member of the Pictures Generation.

Mullican’s work oscillates between various antagonisms — reality and fiction, subject and object, the conscious and the unconscious — to work on our perception, defined less by the objective reality of the visible than by the projection of subjective experiences. His exploration of the subjective experience through the intersection of communal signage with personal semiotics produce these characteristically abstract, geometric forms. Mullican also works with the relationship between perception and reality, between the ability to see something and the ability to represent it.

Cosmology based on the symbolism of representation consists of a range of signs, like photographs, pictograms, diagrams, etc. It generates a form of mental cartography consisting of five distinct parts identified by their respective color references - green is for the elements, for nature and also for death, blue is for the world unframed by the conscious, including the city and everyday life, yellow is for the world framed constructed by art and science, black is associated with language and signs and red refers to ideas, to pure spirit.

Methods that the artist use in producing his art often parallels with art brut and other automatic drawing styles. Since the 1970s Mullican has been experimenting with hypnosis to create art that both examines his subconscious, and functions as a strategy for breaking from the patterns of everyday life. Working under these hypnotically induced intoxications or psychoses, Mullican becomes his alter ego, what he refers to as that person—an ageless, genderless being that inhabits his physical body. The process of creation allows him to seamlessly move between two worlds – world where Mullican is a trained artist, and the world of that person - unclear of where the distinction ends between what could be art of the insane, the subconscious, and the art of the formally trained.

That person’s reality is documented through a series of performances wherein he draws, counts, and writes with ink on large sheets of easel paper. The finished drawings are attached to queen-sized bed sheets in a grid-like pattern, and hung through a maze of installation rooms that acts as a diagram of that person’s reality.

Mullican's work has been exhibited nationally and internationally since the early 1970s at number of venues all over the world. The artist currently lives and works in New York City, where he continues to develop his unique contemporary idiom.