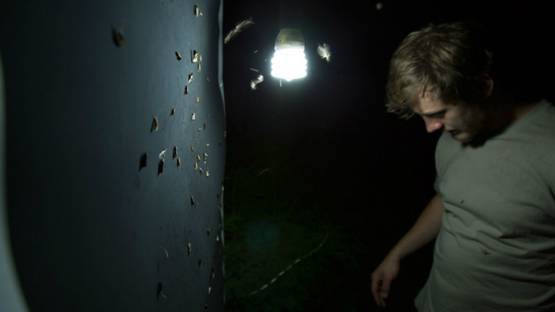 Knowledge of the history of the world and nature have been studied by different imprints and remains. Every living being leaves the trace and information that can explain the evolution. But can the existence of the primitive forms be the equally important? Can their footprints answer the mundane answers? These issues were the starting position for Maximilian Prüfer’s research work of developing a unique and innovative printing process. Using a highly sensitive printer, the smallest contact with the surface letting out the ink, recording every movement.

Motion as the Art Work

Prüfer explains that his work defines itself via the image. Every representation emphasizes the impression of the represented thing; it is a self-illustration. His work does not only include only aesthetical objects, but is made through a conceptual examination of the world. Expanding the limits of the methodological process, he changes the potentials of mediums he uses, turning nearly every movement into a picture. Natural phenomena bring the main and final touch in the creation of Prüfer’s artworks. Fascinated by the complexity of the nature, he is trying to make the visible every little thing that misses human eye.

Sometimes is easy to recognize the traces, as cat’s paws. But others, like snails and flies, leave the marks which are difficult to classify. Reconsidering the ways of how experiences turn into the imagination and ideas into life, Prüfer compares the connections and synapses in the brain with the chaotic swarming of ants. Their motion represents a beautiful image and could be a metaphor for sensory perception, simplifying the process of thinking. Every of his images brings the new discovery and piece of information. Having the fascinating approach to the world, this artist makes the representations that have never been seen before.

Following the natural processes and phenomena, Maximilian Prüfer develops distinctive printing system, the so-called Naturantypie. Using the sensitive surface of the printing area, the slightest movement or change, as the wing beats or the tracks bugs leave behind, is enabled to illustrate, making visible unconscious processes of primitive forms. Representing dead animals, he emphasizes the meaning of life. Questioning the world regardless for its contents, Prüfer initiates the philosophical themes of existence, from the point of view different from we used to.