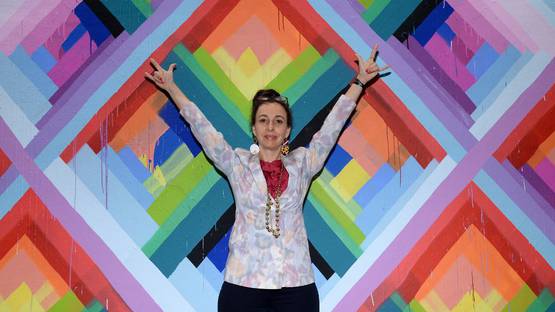 Maya Hayuk is an American multidisciplinary artist, famous for her paintings and enormous murals that can be seen all around the world. Her pieces have composite, and yet harmonized structure and form, emphasized through the use of exuberant and lush colors, and shades. This painter absorbs immediate encirclement, processes it in her imagination by adding psychedelic experience and a mix of the popular culture referents, and then represents it to the viewers in her artworks. Maya’s paints contain a certain sexual and spiritual note, expressed by bright geometric compositions, and made of a waste spectrum of materials like ink, acrylic, spray color, tape, and wheat paste. Hayuk’s artworks are amazingly large, but also attractive and gentle at the same time.

Maya Hayuk was born in 1969 in Baltimore, Maryland. Her parents are psychology and geography professors, who encouraged Maya since she was young, to pursue inspiration by exploring, discovering and traveling around the globe. Frequent moving has marked not only Hayuk’s personal and student life but also her professional. The best proof is her works influenced by Ukrainian Easter Eggs, outer space, Africa, Mexican woven blankets, Mandalas, and Rorschach tests. She lived in Richmond, Boston, Toronto, and San Francisco until she settled down in Brooklyn. Maya holds a degree in Interrelated Media from the Massachusetts College of Art and has studied at the Ontario College of Art and Design in Toronto, at the University of Odessa in Ukraine and at the Skowhegan School of Painting and Sculpture in Maine. In her twenties, Hayuk showed interest in religion, performance art, sound sculpture, and film. Someone would describe her as hyperactive. Her thirst for music is saturated by listening to it, or by producing it with her band called Open Arms.

Artist’s Approach to her Murals and Paintings

Massively scaled murals and paintings are something that has to be seen in person, in order to understand and feel the stimulating potential of her art. So much attention is given to the preparation and details, by analyzing the environment, the light, and the architecture in order to answer the question: What can be added or taken away to produce the best possible effect? Maya describes her pieces as ‘bright, massive, intricate and joyful’. She is a sculptor, a photographer, a printmaker, and an illustrator all at once. Hayuk’s abstract, often monumental paintings made of symmetrical patterns thrill observer’s imagination with vivid and catchy colors. She is also known for collaboration, both in her mural installations as in music. Cooperation with other artists helps her to better understand her paintings. Hayuk made different artworks to support music, from album covers, posters, and videos to stage sets for The Beastie Boys, Rye Rye/M.I.A, The Akron Family, TV on the Radio, and The Flaming Lips.

From 2005-2011 the artist has curated and produced the This Wall Could be Your Life mural project on the exterior walls of the legendary Monster Island/Secret Project Robot in Williamsburg, Brooklyn. In 2008 the author also curated an exhibition called Apocabliss at the Alice Gallery in Brussels. From 2002 Hayuk is a member of the Barnstormers artist collective together with Swoon, David Ellis, Doze Green and Ryan McGinness. She also published two books, the first one Just Good Vibes from 2007 and the second Round the Way from 2010. Her hand-made screen prints are released in London with the help of the Pictures on Walls. Maya has painted wall-size murals from New York and Honolulu to Cologne. Her works have been shown in solo exhibitions and commissions at places like The Hammer Museum, LA in 2013, The Museum of Contemporary Canadian Art, Toronto in 2013, the Bonnefanten Museum, Maastricht in 2012, and the Socrates Sculpture Park, New York in 2011. Maya's work has been included in group exhibitions such as Streetopia at the Luggage Store in San Francisco in 2012, Black & White Outer Space at the Secret Project Robot in Brooklyn in 2011, and Rojo Nova at the Museum of Image and Sound, Sao Paulo in 2010.

Featured image: Maya Hayuk - In front of her mural - Photo by Dimitrios Cambouris, via hufftingtonpost.com
All images used for illustrative purpose only