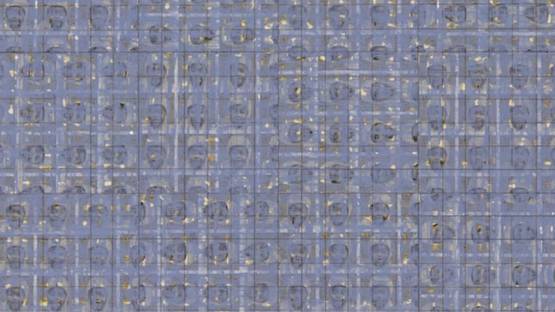 McArthur Binion is a critically acclaimed American artist who came to prominence for astonishing abstractions executed on his personal documents and photographs. By using every possible surface of the documents such as address book, pictures from his childhood, his birth certificate, or found photographs and covering it with abstracted grids, Binion constructs testimonial artifacts that are both visually appealing and saturated with various narratives. These simplistic monochromes reminiscent of Jasper Johns or Brice Marden, reveal the painstaking commitment to painterly conventions that are constantly being stretched, decontextualized, and further manipulated with.

Although only fragments of information from Binion’s documents are visible, the artist’s personal history becomes the public stage for performing a debate regarding identity, cultural and social heritage, and family relations. This particular form of visual storytelling is not surprising since the artist started his career as a writer.

The artist received his BFA from Wayne State University, Detroit, in 1971 and his MFA from the Cranbrook Academy of Art, Bloomfield Hills in 1973.