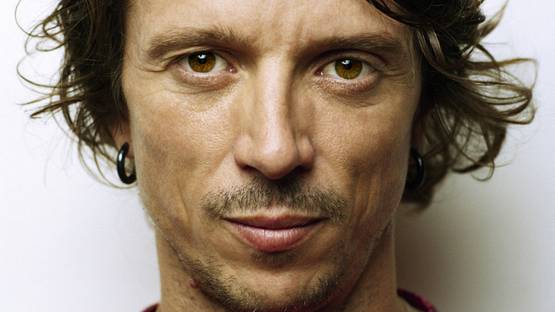 In a world burdened with problems, it seems easier to envision another plane of existence and escape there. Rather than spending your life in such a fantasy place, Mear One, an American graffiti writer, sculptor, and designer, suggests facing the cruel reality. Known for his often politically motivated artworks, he also addresses some deeper themes, such as humanity’s origins and existentialism. He’s a thinker and a storyteller who uses paint to express his thoughts about everything that’s around him. On the streets, Mear One aka Kalen Ockerman, is commonly associated with CBS (Can't Be Stopped – City Bomb Squad) and WCA (West Coast Artist) crews.[1] As a graphic designer, he has a significant working experience, having designed apparel for Kaotic and Conart, his own Reform brand, and the album covers for Limp Bizkit, Alien Nation, Daddy Kev, Non Phyxion…

It is easier to recognize a deeper purpose for creating when the topics are real. The artist’s spiritual and political beliefs consist of the idea that the subject matter should reflect one’s intellect. These thoughts are behind many of his works where he depicts his own philosophical approach to speaking about reality and humanity.[2] False Profits, his arguably most controversial work so far, brands bankers and other financial institutions as charlatans directly responsible for the economic breakdown. The piece is his own interpretation of the excesses, greed, and manipulation by the ruling class, and it makes him proud to use his art as the basis for confronting global human issues. As stated above, it’s much easier for Mear One to just encapsulate and package something like a post hip hop culture and re-sell it back to customers. Instead, he sees a very real opportunity to incite change and that is more inspiring than designs that are popular for the sake of fame and fortune. Acrylic on canvas and silkscreens are based on the mural he’d painted back in 2012 in East London, originally titled Freedom For Humanity. Done entirely in spray paint, the mural depicted a group of old, fat white man playing a game of Monopoly while sitting on the backs of the working class. Immediately, it drew a lot of attention since it was branded anti-Semitic, and after four weeks of debating, the local authority decided to remove the piece of the wall, thus silencing the powerful message it carried. This action only strengthened his resolve to send this message back into the world, and now, a couple of years later, he’s done it once again.

False Profits is his most controversial piece so far

With an early introduction to the world of art, Mear One has been creating since he was just three years old. His mother was a fine artist who painted her dreams, the mandala. A true hippie from the ‘60s. She didn’t have any formal art education, so she didn’t impose that kind of restrictions on her son.[3] In sixth grade, he first saw graffiti while driving around with his mother, and around 1986, he decided to start writing his name on the walls. Unrestricted by education or any other creative chains, he slowly began to experience and explore his own artistic depth throughout the Los Angeles. This adventure turned into his life and he became a serious street artist. At first, he was inspired mostly by painter, especially those who take on behemoth projects like Alex Grey and Robert Williams. The list of his favorite artists also includes Salvador Dali, Leonardo da Vinci, Alphonse Mucha, M.C. Escher, Maxfield Parrish, Hieronymus Bosch, and Norman Rockwell. Nature itself is a powerful source of inspiration.[4] However, he no longer looks up the work of other creative individuals for inspiration, as it effects and influences his own work in a way that he doesn’t need. Instead, he turned to activists, shamans, philosophers, and books, since they seem to speak to him more directly, offering a deeper perspective but at the same time, allowing him to search for inspiration within himself as well as outwards to the reality that surrounds.

He is represented by C.A.V.E. Gallery.

Mear One lives and works in Los Angeles.