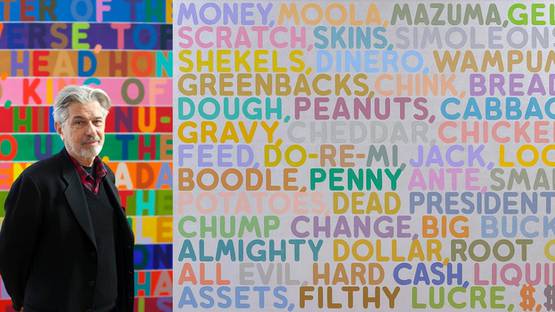 Mel Bochner is an American artist born in 1940. He is one of the pioneers of the Conceptual Art. In high school, Bochner studied Art with Joseph Fitzpatrick. He received his BFA in 1962 and honorary Doctor of Fine Arts in 2005 from the School of Art at Carnegie Mellon University. Bochner studied philosophy for a short time at Northwestern University in Chicago.

In 1964, the artist moved to New York, where he worked as a guard at the Jewish Museum. While in New York, he was given the opportunity to teach art history at the School of Visual Arts. It was at this school that Bochner had his first exhibition, the 1966 show Working Drawings And Other Visible Things On Paper Not Necessarily Meant To Be Viewed As Art, consisted of photocopies of working drawings from his friends placed into four black binders on four pedestals. The show was well received, and was seen as a defining example of the Conceptual Art movement, where the concept of the presentation is the most important aspect of the artwork. In the 1970s, Bochner began to present his work in paintings. His works sometimes featured bright colors and words, and at other times appeared more conceptual than artistic, with the painting appearing carefully planned and executed rather than impulsive. His work employs a variety of media, from oil on velvet to glass stones and chalk on the floor. In 1979, Bochner took the position of senior critic in painting and printmaking at Yale University.

Bochner's works have been widely exhibited throughout his career. In 1985, the Carnegie Mellon Art Gallery organized a major survey titled Mel Bochner: 1973-1985. Elaine A. King was the curator of this exhibition and it was accompanied by the publication of a catalog of the same title. This catalogue was given an award by the American Association of Museums. In 1995, the Yale University Art Gallery in New Haven, showed his work in a retrospective titled Mel Bochner: Thought Made Visible 1966–1973, which was also turned into a book of the same name. For his solo show at Sonnabend Gallery in New York in 2000, Bochner layered German and English versions of a text from Wittgenstein. In 2004, Bochner’s work was exhibited in the Whitney Biennial and was part of OpenSystems: Rethinking Art c. 1970 at London’s Tate Modern in 2005. In 2011, another retrospective, In the Tower: Mel Bochner, was shown at the National Gallery of Art in Washington, D.C. His writings on art also include the book Solar System & Rest Rooms: Writings and Interviews, 1965–2007.