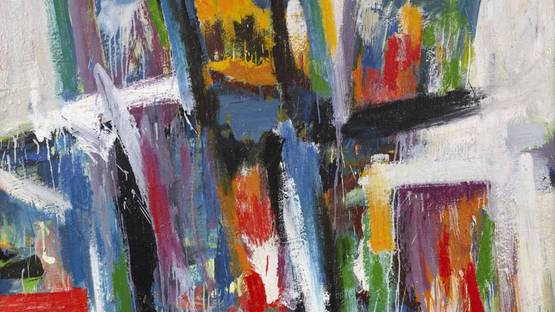 Born in 1920 in New York City, Price died in 1970 in Tuscaloosa, Alabama. Unable to afford formal higher education, Price studied informally at the Art Students League, the New School for Social Research, and the National Academy of Design. Working as a painter in the Works Progress Administration of the New Deal era, he met artists Arshile Gorky, Willem de Kooning, Jackson Pollock, and Franz Kline, who became an influential figure in Price’s career, as well as a friend. Working as an educator, he first taught art in Pennsylvania, including summer classes at Penn State Abington. He later became a professor of Art at the University of Alabama.

Described as vigorous, intense, and highly energetic and deliberately harsh, Price's works are characterized by a tenuous balance between the automatic gesture, the emerging forms, and the depth of the field of the painting itself. His mature works included more aggressive application of paint and sometimes words, numbers, and collaged elements.