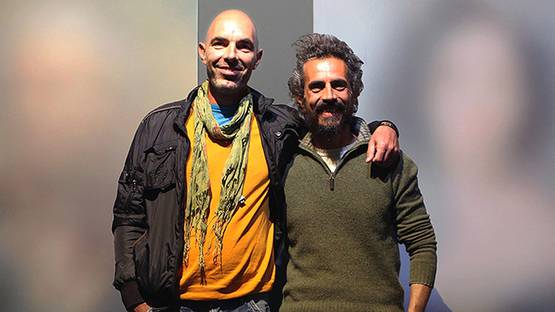 The Miaz Brothers present a radical new take on portraiture. The Italian duo, who are indeed siblings, create large-format canvases using spray paint as it never has been before.

The Antimatter Series, as their body of work is known, incorporates a diverse and refreshing range of subjects. It includes portraits of their friends, their dear departed (Ghosts), philosophers, fashionable female Japanese adolescents, and figures from the era of the English Restoration (Masters). Painting using spray-cans and restricted to a Cyan, Magenta, and Yellow colour-palette, the Miaz brothers display a profundity of technique rarely seen in painting. Commenting on the role of painting and also the ubiquity of the photographic image, the works are themselves situated almost above classification - too distanced from the paintbrush to be wholly considered conventional painting, yet certainly not informative enough to masquerade as photography. The brothers attended the Art School and European Institute of Design. Since childhood, the two have shared their lives collaborating with each other in work and.

While they employ aerosol paints, the Miaz Brothers have never been street artists nor are they ever likely to start. "We use it to represent the fact that we are composed of infinite particles in continuous evolution", they say, "Which change in tandem with the complex reality that surrounds us." The spray paint produces the blurred effect that defines the duo's work: "dematerialising the lines, we gain a substantial indetermination of the picture. This skips any immediate reaction and provokes the viewer to use mnemonic associations instead for their own personal visual information encoding."

While possessing multi-disciplinary skills, the brothers are inclined towards portrait painting as it in itself "prompts questions about the transitory nature of existence". Ultimately though, the Antimatter Series is a stunning selection of artworks.

The brothers currently live and work in Valencia, Spain.