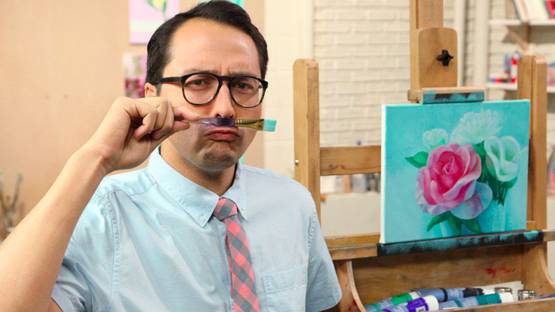 Micah Ganske is an American artist, born in Honolulu, Hawaii in 1980. In 2002, he earned his Bachelor of Fine Arts from the School of the Art Institute of Chicago. In 2003, Ganske received a Post-Baccalaureate certificate from the Maryland Institute College of Art and in 2005 his Master of Arts in painting from the Yale School of Art.

He received the Adobe Design Achievement Award in Digital Photography in 2005, at the event at the Guggenheim Museum in New York. His work was also displayed there. Apart from that, he is a 2012 Fellow in Painting from the New York Foundation for the Arts and 2014 Artist in Residence at Pioneer Works, New York.

Ganske’s works often display the images of dying urban and rural spaces. His paintings and sculptures explore the relationship between our present and its possible futures. He uses a method of stain-painting with diluted acrylic paint and untreated muslin, without stretching and priming his canvases. For his sculptures, he uses a CAD program and a MakerBot 3D printer.