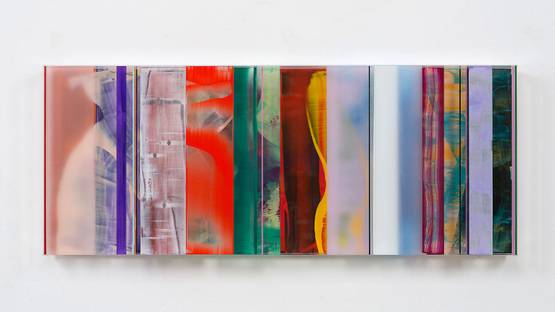 The world around us can be colorless, melding everything into a single shade of gray. Seeing reality in a different way than usual is the core of psychedelic art. Michael Laube is a German contemporary artist who creates three-dimensional artworks by playing with a selection of patterns, colors, shapes, forms, and abstract scenery, all suspended within sheets of plexiglass. The pieces develop an interaction between the virtual image space and the real space, inviting the viewer to abandon the traditional role of pure observation, and instead placing him in the midst of events. The borders between In and Out are being blurred as the multi-layered acrylic glass offers repeatedly new perplexing views and create an ever-changing reality.

Laube approaches his art with a traditional concept of painting on his mind, where his treatment of color, its application and the technique used are all based on the painting in a conventional sense. But, the most basic foundation of the process – working on canvas, is abandoned, shifting the artist’s attention towards acrylic glass as his carrier medium. This decision has given him the ability to choose more radical form while exploring the themes of space, movement, color and light. The main statement in his work becomes the color itself, embedded in a flexible and dynamic system of forces. And yes, it is the acrylic paint that the viewers see, but instead of seeing it on the surface, it’s rather within the artwork, creating mesmerizing and fluctuating highlights, reflections and refractions, through a spatial color effect similar to the one that could be seen in the work of Barnett Newman or Mark Rothko.

Laube was born in Coburg and was a Master Student of Georg Baselitz. Transcending the external pictorial boundary is one of the artist’s main concerns. He hopes to eliminate the traditional border between the observer and the observed image. The colors, depending on the position of the viewer, move along various levels, entering the observational space, transporting the audience from one reality to another, almost in an instant. This intention of Laube’s is even more clear in his installations where he uses the situation, color, and light to further blur the difference between in front and behind, but also inside and outside, merging them into one reality. He seeks the form of unbounded perception rather than a conventional view influenced by experiences and things. The works of Laube, along with pieces from Peter Bynum and Troy Simmons, are currently on display at Psychedelic, a group show at Jan Kossen.

A New Role for the Audience

By breaking through the borders of traditional painting in his own and unique way, Laube simultaneously asks the observers to leave behind all their needs to conform to the definition of the pure objectivity. There is no absolute perception of his work, as it constantly changes, depending on the position of the viewer, involving them as a key element in both the constant process of the transformability of things and in his own spatial movements, giving the observers an essential role in his oeuvre.