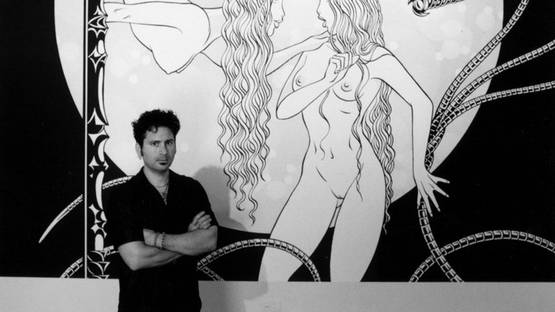 Michael Manning is an American comic book artist born in 1963 in Flushing in the New York City borough of Queens. Manning is also known as writer, fine art illustrator and traditionally trained animator. He is best known for his graphic novel series, The Spider Garden and Tranceptor, which combine elements of pan-sexual fetishism and BDSM culture with complex characters in science fiction and fantasy settings. He is also active in the supernatural horror and fantasy genres, drawing adaptations of the work of authors such as H.P. Lovecraft, Edgar Allan Poe, and Alexandre Dumas for the Graphic Classics comics anthology series, as well as illustrating an anachronistic version of the German folk epic, The Nibelungen.

Manning's artwork has been exhibited in galleries in San Francisco, New York, Chicago, Boston, Omaha, Miami, Los Angeles, Tokyo, and Milan. In 2002, mural-sized reproductions of panels from his In a Metal Web graphic novel were featured as part of a special installation at San Francisco's Yerba Buena Center for the Arts comic book themed exhibition Fantastic! Comics and the Art of Illusion.