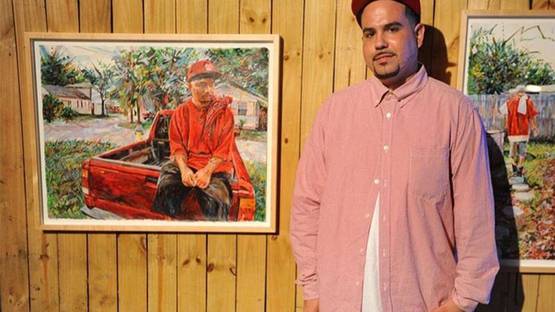 Michael Vasquez is a Florida native artist best known for his vivid paintings that represent the histories, streetwise social codes and mythic nature of a neighborhood street gang.

Drawn from his personal experience as an only child of a single parent mother, Vasquez explored the allure of a neighborhood street gang through the perspective of a boy growing up without a father figure. Throughout his work, Vasquez presents the gang as an extended family, accompanied by its own set of values that seemed to communicate and instill a level of masculinity and toughness beyond a mother's capability. Exploring the duality within these values and accompanying feelings, Vasquez presented mirroring aspects of pride and shame, affiliation and separation, respect and disrespect…

The works of artist Michael Vasquez present the viewer with snapshots of urban life from a safe distance. Beneath layers of thick impasto, Vasquez’s expressive brushwork and pools of saturated crimson ebb and flow with the rhythms of hip-hop music, naturalistically rendered and rough around the edges. Vasquez presents his gangster types in viscous paint, personifications of masculine identity and dominance boasting chains that drip with diamonds and flickers of gold teeth.

The exhibition that marked an exciting expansion in Vasquez’s artistic approach was Rites of Passage, in 2012. In an effort to more directly integrate his photographs—a retrospective of his career as an artist—Vasquez revisited, resized, and reassembled his images to fashion aggressive, large-scale, relief photo sculptures that narrated a neighborhood street gang’s convergence.

Michael Vasquez’s work has also been included in numerous institutional and museum exhibitions such as his aforementioned solo shows in Chattanooga, North Miami, Florida, Arizona, Washington… His work was also shown internationally for the first time in 2010, when it was included in “Franks - Suss Collection” at the Saatchi Gallery in London, England.

He lives and works in Miami, Florida.