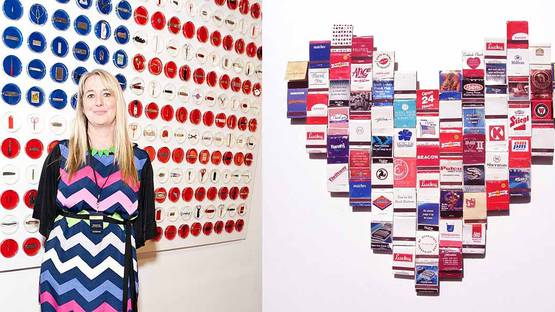 Michele Pred is a Swedish-American conceptual artist. She works with found and confiscated objects and technology imbued with cultural and political meaning.

Michele Pred was born in San Francisco. She received her B.F.A. with distinction from the California College of Arts and Crafts where she is an adjunct Professor. She also obtained a certificate in French Language from University of Sorbonne, France. Pred attended San Francisco State University, California as a graduate student. She received a CCA faculty development grant from the Wallace Alexander Gerbode Foundation in 2012.

Pred incorporates aspects of contemporary culture and politics in her art. She comes from a family of scholars, anthropologists, sociologists, and geopolitical educators, thus her own predilection toward work that comments on contemporary society, while plumbing what might be considered its cultural artifacts. She uses these artifacts, such as a range of objects now forbidden for travel, for her palette and sculptural material. Pred’s preference for unconventional materials has been a constant, materials associated with memory of time, place, and events. Pred says of her raw materials, ”the diverse array of assembled ‘dangerous’ items may be regarded as the cultural residue of a particular moment in history…each small tool, like each of us, bears some weight of the changed world.” Pred has expanded her vocabulary of image, form, and materials, revealing the strength of her conceptual underpinnings, the thoroughness of her research, and the range of her sculptural expression.

Pred’s Berkeley studio is filled with boxes in which she sorts her materials. Scissors are sorted by color of handles, knives are placed together, and clippers with images are in one box, silver clippers in another. The raw materials, the artist’s palette, await her conceptual approach.

Her artwork has been exhibited in galleries, art fairs and museums in London, Stockholm, Sydney, New York, Bologna, Miami, Los Angeles, Chicago and San Francisco. Her work is part of the permanent collection at the 21st Century Museum, The Fashion Institute of Technology (FIT) New York, The Contemporary Museum in Honolulu, the Di Rosa Preserve in Napa, CA and is held in numerous corporate and private collections. Also, her art has been reviewed and featured by The New York Times, The International Herald Tribune, ARTnews, Art in America, WIRED, American Craft Magazine, Huffington Post, Rachel Maddow, ReadyMade Magazine, and many more.