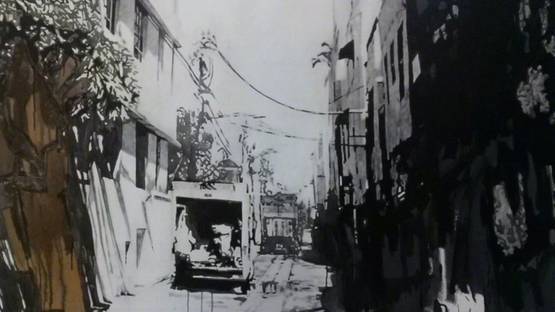 A visual artist from Ljubljana, Slovenia, Miha Strukelj works in painting, drawing, and site-specific work. Drawn to ambiguous nature and the confines of a space, he creates urban landscapes that have a new sense of place by combining different real or fictitious elements, or by abstracting real topologies.

Urban spaces are defined by architecture, landmarks and points, which creates tension, while, in between, there are empty and forgotten spaces. Strukelj focuses on these in-between spaces with no content, exploring how we define and perceive reality and how architecture and environment shape us. By leaving empty patches in his works, the artist challenges the viewers' perception of these genres. This exploration has led him to investigate how painting and drawing function in physical space, attempting to bring them into space by constructing large-scale installations.

Strukelj is a graduate of the Academy of Fine Arts Ljubljana, Slovenia in 2001 with a Master of Fine Arts. He has won several awards, including the Pollock-Krasner Grant 2008/09 and the Henkel Drawing Award 2008. His work has also been included in the National Collection of the Museum of Modern Art in Ljubljana. In 2009, he was the sole artist to present his work in the Slovenian Pavilion at 53rd Venice Biennial.