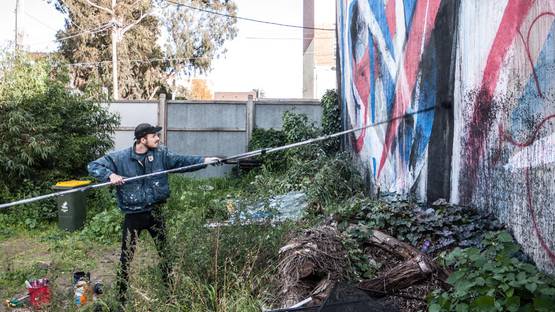 Mik Shida is an Australian artist, born in 1990. He is best known for his large scale murals. Shida was interested in art since his early age but never had any formal art education. His involvement in Melbourne street art began in 2004 with work that can be seen in documentary titled RASH. Over time his work has become popular subject on international blogs covering street art.

Although he started his street art career in 2004, he says that he started painting properly in 2006. His inspiration during this period he found in artwork of various European artists that he had seen during his travels through Europe. Another source of inspiration for Shida was emerging stencil scene in Melbourne at that time. Shida has used almost every imaginable medium to create his art. He has done work on canvas, created sculptures, made stickers and painted colossal murals. As he says, he likes to paint anywhere he can get away with it. For his work he states: “Over time my pieces developed from doing quick continuous lines on the street, this then evolved as my works grew gradually larger and more intricate. The lines mimicked the movements of my body, using a spray can, which I then ran with, essentially utilizing my arm as a kind of a bodily protractor. My works continued to grow and now my style is just natural to me like speaking. I would best describe my style as expressive, psychedelic and fractal based.” In his opinion street art scene in Australia is of a higher caliber than anywhere else, and although he would say that they are under appreciated as a street artists, he is under a feeling that they are slowly breaking through. Shida started exhibiting his work since he was sixteen, and never had any other job. “I feel free, and I’m no one’s slave” he states. Painting murals on five continents, on various locations, sometimes he risked a lot for his art. He painted: “From New York where you can serve jail time for a sticker, São Paulo where strangers bring you food and beer all day just for doing their neighborhood a favor, jungle mountain tops in Cambodia, abandoned spy stations in Berlin, to the back alleys of Australia.”

Some of his more recent works include participation in the Galeria Urban Forms large format street project in Łódź, Poland in 2012, where he painted a five-story mural over twelve days. He has also been involved in multi-story mural projects in Phuket, Chicago, Berlin, Vienna, Brisbane, Melbourne and the Gold Coast. Mik Shida currently lives in Łódź, Poland.