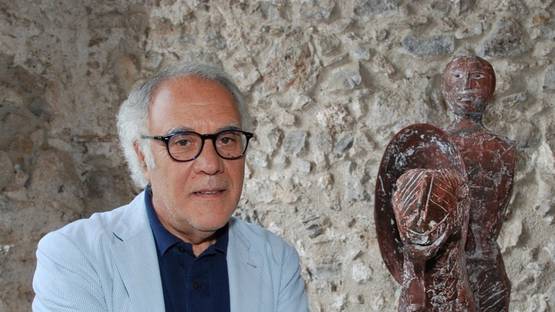 Mimmo Paladino (Domenico Paladino) is an Italian artist born on 18 December 1948 in Paduli, Campania, southern Italy. He is known as a sculptor, painter and printmaker. He played a leading part in the international revival of painting towards the end of the 1970s.

In his first work, in line with the prevailing conceptual climate at the time, he showed an interest in photography, but in 1977 he had already moved on to the creation of two major tempera murals, one at the Toselli gallery in Milan and one at the Lucio Amelio gallery in Naples. In 1980, he exhibited his work at the Venice Biennale, in the "Aperto 80" exhibition. However, it was largely thanks to a picture exhibition held in a range of Central European museums, from the Kunsthalle in Basel, to the Museum Folkwang in Essen and the Stedelijk Museum in Amsterdam, that Paladino finally consolidated his international fame. In 1981, the Kunstmuseum in Basel organised a major personal exhibition of paintings, curated by Dieter Koepplin. The Galleria d'Arte Moderna in Bologna also dedicated a personal exhibition to him that year. In the early 1980s, he began making his first sculptures. Exhibitions followed, one after the other, and in 1981 Paladino took part in A New Spirit in Painting, at the Royal Academy of Art in London, and the Paris Biennale. In the following year, 1982, he took part in the Sydney Biennial and the Documenta 7 in Kassel. He exhibited at the Transavantgarde exhibition in 1983, at the Fundació Joan Miró in Barcelona, the New Art exhibition in London's Tate Gallery that same year, and the Det Italienska Transavangardet at the Lunds Konsthall in Stockholm, the following year. Drawing always plays a fundamental part in Paladino's work, and he was the leading participant in the 1983 Nuovi Disegni exhibition at the Kunstmuseum in Basel.  In the 1990s, he began carrying out important interventions on urban spaces, such as the permanent Hortus Conclusus installation in the San Domenico cloisters, in Benevento (1992). In 1994 he was granted a personal exhibition in Naples, in the Scuderie di Palazzo Reale, Villa Pignatelli Cortes, and piazza Plebiscito, where he installed the Montagna di sale. In 2001, the general catalogue of his graphic work was published (Opera Grafica 1974-2001), curated by Enzo di Martino, for Art of this Century, New York – Paris. The Centro d'Arte Contemporanea Luigi Pecci, Prato, granted him the most comprehensive retrospective exhibition ever organised by an Italian museum, curated by Bruno Corà in 2002. In 2003, together with Sandro Chia, Francesco Clemente, Enzo Cucchi, and Nicola de Maria, he put on Transavanguardia 1979-1985 at the Castello di Rivoli Museo di Arte Contemporanea, curated by Ida Gianelli.  In 2004, he created the doors for the Padre Pio church in San Giovanni Rotondo, designed by Renzo Piano. In 2005 he exhibited at the Museum der Moderne Rupertinum in Salzburg, and the Loggetta Lombardesca in Ravenna put on Paladino in Scena, a major exhibition of his theatre work, curated by Claudio Spadoni. In 2007, he produced two theatre set designs for OEdipus Rex and Cavalleria rusticana, for the Teatro Regio in Turin, and put on a personal exhibition at the Galleria Civica in Modena. In 2008 he presented a major installation at the Museo dell’Ara Pacis in Rome. In 2009, a group of his sculptures was shown in Orta San Giulio, Lake of Orta, in a show curated by Flavio Arensi. In 2010 Mimmo Paladino designed the set of Work in Progress, a tour which featured the reunion of the famous Italian singer songwriters Lucio Dalla and Francesco De Gregori, thirty years after their previous joint initiative. At the end of January 2011 he designed the new permanent room at the National Archaeological Museum in Villa Frigerj in Chieti devoted to the Warrior of Capestrano and he opened the exhibition of sculptures that focused on the new Warrior, housed at the exhibition centre of the Fondazione Carichieti in Palazzo De Mayo. An important exhibition on his ceramics was held in the Museo MIC in Faenza in 2012 and, in the same year, he designed an installation of a large marble cross in Piazza Santa Croce in Florence.

Paladino currently lives and works in Rome, Paduli and Mattinata.