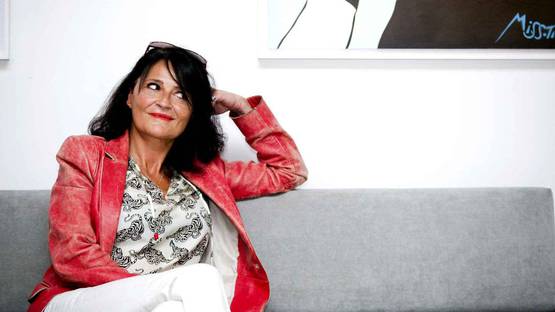 Miss.Tic, born in 1956, in Montmartre, France, is a Parisian visual artist and poet, one of the pioneers of street art in France. She is known for her stencils of dark haired woman often seen in the streets of Paris and associated with poetry.

In 1980, she goes to California and discovers Graffiti. After two years, she goes to Paris and starts applying her artistic talents in different ways, including theatrical stage sets. She joins the VLP (Vive la Peinture) movement, struck by the work of artists like the Frères Ripoulain, who hijack street posters and, in 1985, paints her first stencils on the walls of the city.

The exact meaning of her alias, MISS.TIC, remains a secret, aside from it being borrowed from a Disney character. She admittedly has a soft spot for that funny little witch, committed to stealing Uncle Scrooge’s magic penny, yet constantly failing in her mission. Her poetic and humorous paintings are exactly where she wants them to be: on the walls of Paris, offered to the public, accessible by all, refusing to be locked up in museums.

Her first exhibition, at the agnès b. gallery, in 1986, puts her in the spotlight. Her quirky titles are intriguing, and based on wordplay and double entendre “Maudite sorcière” - cursed witch, also an old French expression used against a mean woman, “Femmes mur” – “wall women”, also a phonetic pun for  “mature women”, “Muses et Hommes” - “Muses and Men”, also a pun for Museum.

Recognized early on in her practice, she is by all means an urban art icon. She has shown her works in public spaces, galleries and international art fairs. Her works have been acquired by the Fond d'art contemporain de la ville de Paris and the Albert Museum in London. She has worked for Kenzo, Comme des garçons, UCAR, Louis Vuitton and a French ministry. The city of Orly has commissioned her a public mural, and she signed the film poster for Claude Chabrol’s movie, “La Fille coupée en deux”.

Because of the impossible-to-translate aspect of her poetry, her career and exhibits over the course of the last twenty-something years have been, though highly successful, very French, and very Parisian.

Miss.Tic transcribes her everyday life into stencils that are usually based on the “self-portrait plus one line poem” combination. The poems are often a few words long, in the same writing style she has developed, and her seventies wild and dark hairdo is recognizable among all. Her stencils are generally applied in a single layer, but sometimes she uses two.  Her graffiti is especially present in the 13th district of Paris, where she has her studio.

In recent years, Miss.Tic’s texts have become more and more central in her work. While her stencils are meticulously prepared, her texts, born from her love for wordplay, are written impulsively. And though they have little to do with political protest, Miss.Tic’s undeniably bear certain feminist connotation, a reflection of her, if not activist, personal position. The words left on the walls resonate like excerpts from a personal diary. With an unequalled sense of dialogue and poetry, she has created a language of her own, mixing shape and words, and giving the city a new voice to share.