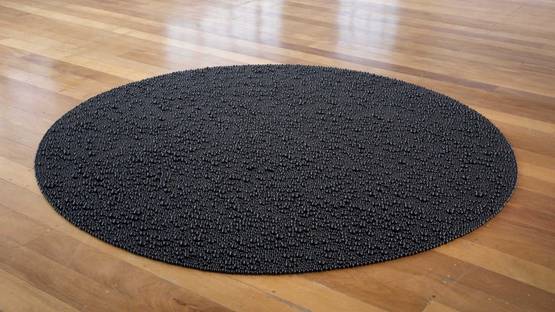 Mona Hatoum is a Lebanese-born Palestinian whose video art and installations bring a unique vision of social and individual exploration. She has a theoretical approach to her art, and the thorough work she does makes her framework well designed and sensible. Hatoum tells the story of the body, individual experience of the self. For the second theme, she took all the personal experience from growing up in political turmoil. Social and political analysis on politics is combined with architecture and diverse culture of different countries. The sculptures and installations are highlighting the personal reference the viewer can obtain while looking at the pieces from different angles. Different angle gives a different point of view.

Mona Hatoum was born in Beirut, Lebanon in 1952, to Palestinian parents. Her childhood year was filled with extensive hours of drawing and illustration. She liked to make up illustrations that would follow her school lessons. Her parents supported her hobby and encouraged her to create continuously. She enrolled the Beirut University College and studied graphic design. While she was still a student, she took a job in an advertising agency but felt the office life didn't suit her. All the work she did was just a compromise, instead the original creative idea she knew she had inside. When the civil war broke out in Beirut, she was already in London on a visit, and giving the circumstances in her country, she decided to stay there and never to return. Fully aware how much damage a war brings to every single individual she decided to free her thoughts and share them with others in the form of performance art, and later installation and sculpture. In London, she attended to colleges, Byam Shaw School of Art and UCL Slade School of Fine Art, for 6 years, starting at 1975 when she made London her home.

Hatoum was first introduced with performance art by her professor in college in London. She realized that visual art is the language she speaks. Affected by wars in Lebanon, and Palestine where he parents were born, she performed to make people familiar with poverty, torture, pain, violence, separation and fear. She ran away from Beirut to London but brought all the consequences of war with her. Full of emotion, she improvised every single performance, letting out all the bottled rage and anger. The sudden, spontaneous outbursts of creativity helped her to gain confidence and to grow as an artist. One of her most memorable performances early in her career happen in 1982. The name of the show was Under Seige and it was happening at Aspex Gallery in Portsmouth. Mona Hatoum was standing naked in a transparent box. Her body was covered in clay, and every time she was touching the surface of the box, she would leave a muddy mark. She couldn't get up, she was repetitively falling down, the walls were completely dirty by the end of the day. As a soundtrack for this performance, there were national, revolutionary songs in English, Arabic and French playing at the gallery.
The experience was intense, almost anxiety-ridden at times. That performance marked the rest of her career - Mona Hatoum was intense, tough, brave and aware that there is more to social and economic aspects than the governments are telling us there is. The artist never forgets to show concession to her childhood experiences and family.

Many performances followed Under Seige. She organized the one called The Negotiating Table where she lied naked for hours, wrapped in plastic and medical gauze. In 1985, she walked the streets of Brixton naked, while dragging a pair of Dr. Marteen’s boots tied to her ankles. Ten years later, she was still doing the performance. The choice of material and tools was always intentionally dirty, raw and repugnant, whether it was organic or industrial. She wanted to shock the people, to make them vulnerable while facing not-so-pleasant sights, in order to induce the strong emotional reaction. Even in her installations she used nail clippings, bodily fluids, pubic hair, images of the inside of her stomach! All of the items were symbolic and intentionally chosen. Once she placed pubic hair and made a piece called Public Garden. It was just a simple wordplay in action, but also a piece that signified the struggle of carrying the female sexuality. After the performances, she started making sculptures. She uses everyday items, parts of furniture, kitchen tools, office supplies, and clothing. The sculptures and installations are often enlarged, deformed and completely deprived of their original practical function. Metaphorically this symbolizes a person, exiled from their country, lost in translation and struggling to get a new identity. The person is deprived of its original features.

Mona Hatoum lives and works between London and Berlin.