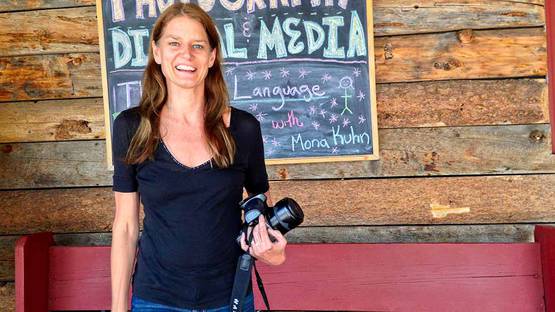 Mona Kuhn is an artist known for large-scale photographs of nudes. Kuhn chose the nude as the focus of her work because it represents a timeless canon and she was interested in the idea of the body as residence. She describes her visual vocabulary as figurative, however recent works have begun explorations with abstraction.

Mona Kuhn was born in 1969 in São Paulo, Brazil and is of German descent. She received her BA from The Ohio State University and went on to study fine art at the San Francisco Art Institute.

Mona Kuhn’s photographs of nudes aim to show the human body in its most natural state. Stripping away the distraction of material adornment, her subjects become timeless and free from cultural and/or generational stereotypes.

Working intimately with a group of friends, she considers each photograph a collaboration. The subjects’ postures mirror their environments and each series flows like a lyrical ballad, opening up a dialogue about the human body’s interaction with the setting. Classically trained, Kuhn’s compositions are painterly studies, each photograph thoughtfully arranged. Each image is multi-dimensional with a careful selective focus, giving the viewer the opportunity to only enter specific areas of the frame and leaving the remainder up to the imagination.

Kuhn's first monograph titled „Photographs” was published by Steidl in 2004. “Photographs” was followed by Evidence in 2007, which was accompanied with a short story by Frederic Tuten. Her next project, released in 2010, was a return to her homeland of Brazil, with a series titled Native and an accompanying monograph of the same name published by Steidl. In 2011, Kuhn released Bordeaux Series, also with a monograph published by Steidl, which is a collection of traditional portraits and landscapes. Her work has been described as "intimate and sensuous," "dreamlike" and "classical" in composition.

In a 2013 interview with ARTnews, Kuhn compared her process with childbirth, saying of the completion of a project that “When you feel that you are ready, you want to separate from it. You can’t take it anymore, and you have to push it out. And once it’s out, it takes on a life of its own

Kuhn currently lives and works in Los Angeles and is an independent scholar at The Getty Research Institute.